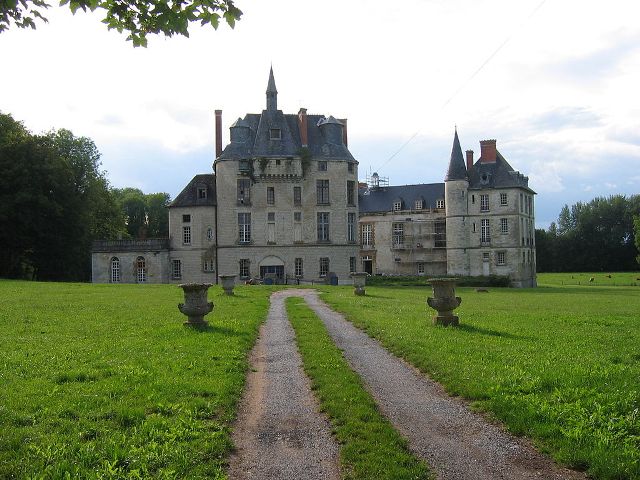 Location: Thugny-Trugny, in the Ardennes departement of France (Champagne-Ardenne Region).
Built: 16th century.
Condition: In good condition.
Ownership / Access: Private.
ISMH Reference Number: PA00078531
Notes: Château de Thugny-Trugny a castle Thugny-Trugny in France. Became the property of one of the first fortunes in France, Antoine Crozat, the place was particularly sumptuous during the Enlightenment.Even today, despite having suffered greatly during World War II, "when you see him emerge with its towers and turrets ridge, one thinks of a dream setting, or animé drawing."This castle is also interesting from an architectural point of view.This Renaissance building in the middle of a leisure park, actually, literally and figuratively meaning two faces:one facing the village retaining a traditional vocabulary, feudal and defensive with battlements or ditches, and a Gothic overtones with turrets,the other forward-Aisne with more linear forms, more sober, more rectangular, almost classic, even if the plan was not the regularity and symmetry of classicism.Following damage during World War it had to be rebuilt on the basis of old plans, by rebuilding only part of the pavilions and using 1920 years building techniques.When we arrive in the village of Castle Street, first building stands before us, the gatehouse, a little fortified look. It is an oblong building plan, including, quite symbolically, a line of battlements protecting the entrance, and a carter passage arch opening on a voûté pass. Behind the gatehouse, a classical building façade develops on two levels facing the canal. It has two large pavilions of projecting angle, of unequal importance and on three levels. The largest of these corner pavilions has three bays. It is built gaize, reinforced frames the hardest stones and iron Satchel. A terrace with balustrade was created over arches, remains of a building damaged in 1918.On the side, hidden in the trees, stands a stately barn curious, rectangular, with each corner turrets topped with pepper pot. According to an old engraving by Claude Chastillon, this building was previously protected by a stone wall.

How To Get To Château de Thugny-Trugny (Map):