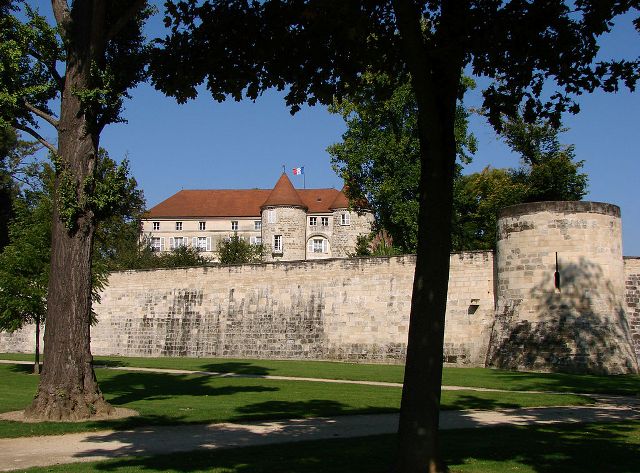 Location: Saint-Dizier, in the Haute-Marne departement of France (Champagne-Ardenne Region).
Built: 12th century.
Condition: In good condition.
Ownership / Access: Owned by a private company.
ISMH Reference Number: PA00132595
Notes: Château de Saint-Dizier is a French castle Haute-Marne in the Champagne-Ardenne region, is registered since 1994.The city is castral town, village of a pregnant fortification including a castle that is installed on the grip of the village of Olonne. The first mention of a castle is made in 1189 in the second cartulary of Montier-en-Der Abbey and belongs to Guy II Dampierre3. The completion date is 1228 because the Lord asks residents to keep their plaids in his castle. He remains in the Dampierre family until 1401 with the death of Edward Dampierre (Dampierre Saint-Dizier From or Flanders) where it passes Vergy when his widow remarried John III of Vergy. He made two thousand five hundred gold crowns to work château4 and had its image to add the castle door: reds with three gold cinquefoils. It is part of the royal estate in 1477 as Louis XI gave it to William IV of Vergy. But the donation is revoked by Charles VIII in 1488 and again attached to the royal domain. royal stronghold, it is then controlled by a governor who is assisted by a lieutenant. In the sixteenth century the Royal Engineers modified the castle by adding it to bastions5; one of the Royal Engineers was Tomaso Girolamo Marini. If the ramparts, at the expense of the city were pretty well kept, the dépendenses were less well. The royal castle was left prerogative, the Duke of Orleans had until 1701. The castle serves as barracks for passing troops and the governor M.de Biaudos Casteja, there lived not; he hired a lawyer in the parliament of Paris, M.Mahuet who had subleased to city parts stores and attics, then a college and planning to install the offices of the city in 1772. This is the beginning of a legal conflict between the municipal authority and the representative of royal powerThis is the great 1775 fire in the city streets of Chalons in Ancerville was created as an extension of the Grand Rue du Sauvage Jean Joseph Bochet of Coluel, chief engineer of Roads and Bridges in the province of Champagne. In 1781 at the end of the work, the castle lost its isolation and defensive unit, the castle becomes instead abandoned. In 1776, Mr. Berault, Baron de Courville and captain of the Comte d'Artois hunts had bought the privilege, his widow, Anne Marie Grossard of Virly, obtained the Council of the King a long lease of 99 years6 to continue enjoying buildings the governor. He was sold as national property during the French Revolution and the garden was enlarged by filling ditches. Ms. Courville Daston become widow obtained the bare ownership in 1807, the property was then dismembered. During the nineteenth century the tower Cocquart was abolished and a corner tower, a curtain. In 1826 Nicolas Coquart becomes the owner, his daughter married to Sieur Viry, ironmaster in Coutances, kept it. The 1945 fire destroyed much of the castle, its reconstruction was carried out by the Viry family and leased to local sub-prefecture that had Wassy. Expropriated for public purposes, the Viry family was the last private owner, a major restoration campaign was undertaken in 1997 which gives it its current appearance..