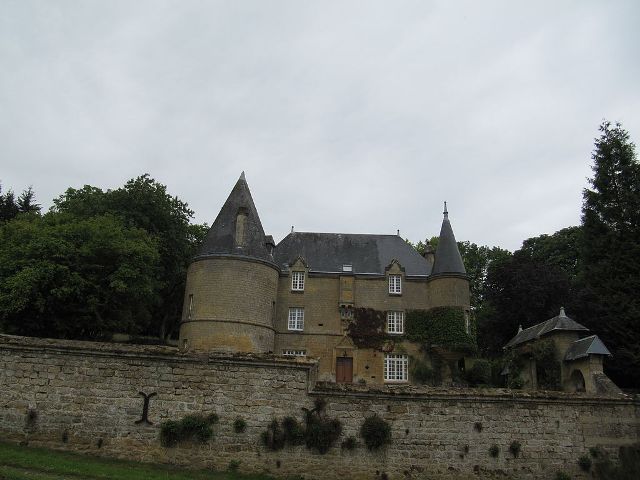 Location: Remilly-les-Pothées, in the Ardennes departement of France (Champagne-Ardenne Region).
Built: 16th century.
Condition: In good condition.
Ownership / Access: Privately owned.
Notes: Château de Remilly-les-Pothées is a strong house located in Remilly-les-Pothées, France. Built in troubled times by external and internal threats to the Kingdom of France, especially the religious wars, the building in the town hall has undergone transformations. But he remained for now the property of the family who founded it.The castle consists of a rectangular main building flanked in the north tower and the north east of a watchtower. In the absence of drawbridges and moats, a gatehouse defends the entrance.Inside the building, the space is limited to four rooms, two on the ground floor and two upstairs. The rooms located in the East preserved their carved stone fireplace and the room on the ground floor of the tower. A staircase housed in the thick walls provides access to a semicircular vault.A large attic served originally the gatehouse and deadly under the ledge. He was subsequently appointed.The date 1577 is etched above the door.The castle has since its establishment owned by the same family, or Rymbert Rimbert, even if the surname has changed in father transmissions daughter. This family, who have not migrated, crossed the French Revolution without losing his property. Although Rimbert citizen, formerly noble, was ordered in the most turbulent period in 1794 to remove a part of the defensive devices, loopholes, battlements and canardières, strong house, Robert Rimbert, former military and invalid pensioner before the 1789 revolution, was even asked by the inhabitants at the beginning of this revolution, to order the national guard. The castle originally had two towers on opposite corners, and two rectangular watch towers. In 1925, a restoration has resulted in the widening of the windows, and the creation of a second floor with gable windows that indent the base of the peak. The building is registered as historical monuments in 1927.This house is a private home that is now open to the public by appointment.