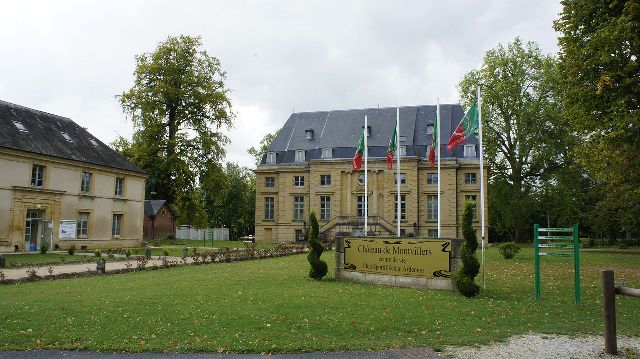 Location: Bazeilles, in the Ardennes departement of France (Champagne-Ardenne Region).
Built: 1770.
Condition: In good condition.
Ownership / Access: --
Notes: Château de Montvillers is a French château in the neoclassical style located in the town of Bazeilles in the Ardennes department in the region Alsace-Lorraine-Champagne-Ardenne.It was built in 1770 for John Abraham Andre Poupart de Neuflize, clothier at Sedan by the architect of King Claude Jean-Baptiste Jallier of Savault, student of Jacques-Germain Soufflot and collaborator of Ange-Jacques Gabriel, First Architect of the King.John Abraham Andre Poupart de Neuflize (1714-1793), a leading cloth manufacturers in Sedan, bought the site, which was to be formerly a hamlet, now defunct, called Montvillers, Charles Chardon in 1764. a sheet metal works - that is to say a metal processing plant - is there, probably since the late seventeenth century. Poupart transforms it into foulerie, ie a workshop where they crowd the sheets, which machines are driven by a derivation of the Givonne. He was ennobled by letters patent of Louis XV in April 1769. In 1770 Poupart built a castle close to the fulling. It is assumed that Claude Jean-Baptiste Jallier of Savault is the architect. The castle is more than 200 000 pounds to John Abraham Poupart who uses it as a country residence and place of receipt. The Marquis de La Fayette, a young officer stationed in Metz, would have been received about 1777.After John Abraham Andre Poupart, the estate passes to his eldest son, John Abraham André I (1752-1814), which is made baron of the Empire by letters patent of June 13, 1810. The title will be confirmed in favor of his son Jean Abraham Andrew II, mayor of Sedan, on 30 November 1816 and 4 March 1817. In 1826, Eugene Schneider I, then twenty-one years, has lead the forges of Bazeilles. He was received into the family Poupart wife in 1837 and a granddaughter of the builder of the castle, Constance Lemoine Mares. The property then enters the Schneider family. During the 1870 war, it is fighting the major theater. The drama critic Charles Emmanuel Palamet of Matharel Fiennes (1814-1890), owner since 1848, puts the castle providing a religious congregation, which transforms it into school and infant school. In 1942, the family Terbecq, owner château2 in donated the Auteuil Orphans apprentices who set up an orphanage until 1973.The site was bought in 1986 by the department of Ardennes creating a hotel school on part of the field. The part including the castle and its outbuildings was bought in 1999 to 3 million francs (457,000 euros) by CS Sedan Ardennes (CSSA) that renovate buildings and installs its offices and training center.In July 2004, the castle was destroyed by fire. The disaster has devastated most of the four-story building, which housed the management-marketing services, the administrative unit of the CSSA and a gourmet restaurant.