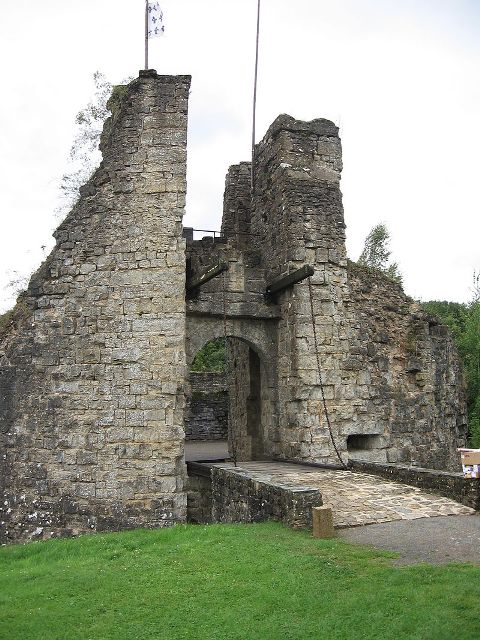 Location: Montcornet, in the Ardennes departement of France (Champagne-Ardenne Region).
Built: 11th century.
Condition: Ruins.
Ownership / Access: Owned by a private company.
ISMH Reference Number: PA00078463
Notes: Château de Montcornet is a medieval fortress built between the eleventh and twelfth centuries, in the town of Montcornet, in the Ardennes.The castle is located on a spur called Mont-horned overlooking the valley and which probably was inhabited from prehistoric times until the eleventh or twelfth century (the exact date is not known), construction period of the castle.The excavations have established that the castrum of the fort dates back to early feudalism. The first to have lived in the castle are the Montcornet.The thirteenth and fourteenth centuries, the fortress passes Miles Walnut and to the family of Mello. In 1443, Charles de Noyers and Jeanne Murchain sell this lordship the Earl of Nevers2. In 1446, Antoine de Croy (1390-1475) (chamberlain of Philip III of Burgundy), bought the and deeply reworked to fit the gun. This same Antoine de Croy gives his family a considerable importance in successfully become the closest adviser of Philip the Good, especially in the last decade of his reign. The Croÿ get therefore governments securities and largesse. In 1613, Charles de Gonzague, which is the process of building, some distance away, Charleville capital of the principality of Arches, buys it. The castle passed to the Meilleraye, then the Duke of Aiguillon which dismantles in 1766.Only ruins happen to Chabrillan then Madame de Caumont La Force in 1961 agrees to assign to Abbot Bernard Lussigny who helped by groups and local associations undertook conservatory repairs and excavations.The discoveries made during the excavations are on display in a room near the castle (keys, 400 coins, pottery, balls, bones).Since the death of Abbot occurred in December 2009, the Friends of the Castle of Montcornet owns the castle and ensures backup.What remains of the castle is the subject of a registration as a historic monument since July 19, 1926.Google Traduction pour les entreprises :Google Kit du traducteurGadget Traduction.

How To Get To Château de Montcornet (Map):