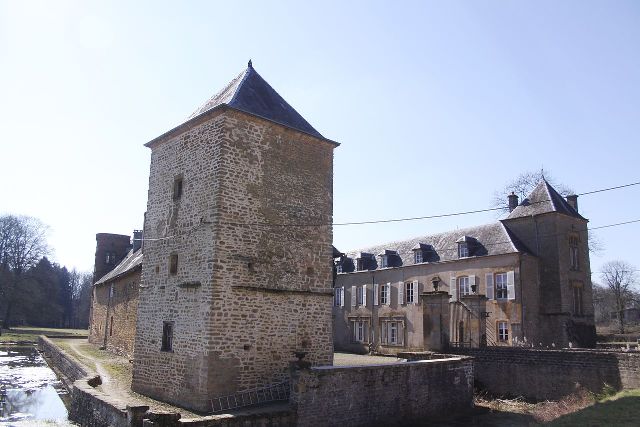 Location: Rubécourt-et-Lamécourt, in the Ardennes departement of France (Champagne-Ardenne Region).
Built: 16th century.
Condition: In good condition.
Ownership / Access: Privately owned.
ISMH Reference Number: PA00078494
Notes: Château de Lamecourt is a castle Rubécourt-and-Lamécourt, France.The castle is surrounded by bodies of water and a park, wooded slopes below. The two square towers, which surround the entrance, are the oldest parts are dated and as the rectangular layout of the sixteenth century moat. The other buildings, the main building and two wings have been redesigned several times, with the addition of two sizes smaller towers, processing windows in neo-Gothic style, the park development. To the left of the entrance, outside the moat, the stable block has a classical facade with fluted pilasters, surmounted by an entablature and a triangular pediment, and a three-sided apse.The castle is attested since the sixteenth century. It was attended by the Leaguers in 1588 and taken over by the Protestants that year. It hosted a temple to the reformed religion, which could be the stable block outside the moat. The portal is the seventeenth. Succeed on this property the families of Youth, of Dainville Billot, Vissec Latude, the Martins, the Coquebert de Montfort, the Lespagnol the Orsel of the Touchain La Lussière.In the nineteenth century, the castle becomes the property of manufacturers, Ternaux then Montagnac, whose factories are on the field, on the other side of the pond.Elize Montagnac owner was in the nineteenth century.The building was listed as historic monuments in 1986.