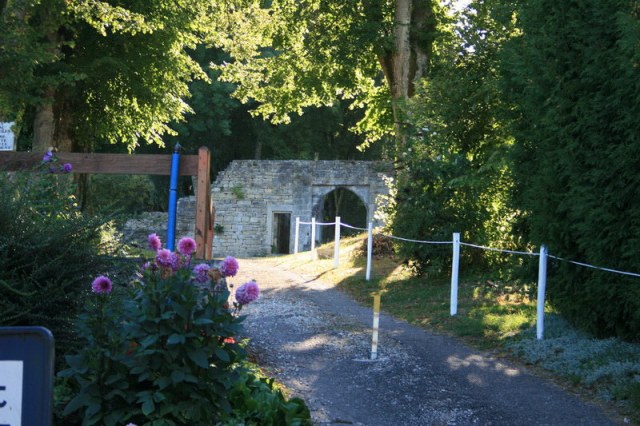 Location: Lafauche, in the Haute-Marne departement of France (Champagne-Ardenne Region).
Built: 11th century.
Condition: In good condition.
Ownership / Access: Owned by the town.
ISMH Reference Number: PA00079084
Notes: Château de Lafauche is an ancient castle located in the town of Lafauche in the Haute-Marne, 40 km from Chaumont, prefecture of the department. Built on top of a hill, it was very large, well fortified, surrounded by a wall 1.5 meters thick and flanked eighteen laps.Lafauche Castle was rebuilt in the late fifteenth century, solidly built and well distributed by Jean de Baudricourt, to support a long siege artillery. It was then on the frontier of the kingdom of France, facing the Duchy of Bar and the Duchy of Lorraine. Can still be seen on a small hill called the Châtelot, works to protect the castle and stop the attackers. One finds other, on different surrounding eminences.Two drawbridges gave access to the enclosure and above the main door called the Griffons, there are the arms of France and those of Lorraine on the door of the feudal tower. This tour was a huge dungeon three floors served as a stone staircase. They went up the tower with a staircase in stone, on the gantry which were engraved the arms of France. Narrow staircases covered, led from the dungeon to four round towers and lower, built on the same line as the great tower, two right and two left.The chapel, which took place near the dungeon, under the patronage of St. Andrew, was founded by Jean de Baudricourt in 1495. In addition, we note another building where there were a large kitchen and a huge room with an adjoining office ; a well was dug in the backyard. There were underground and prisons a substantial depth (in the tower called Lardier round, the first round turn right dungeon).The first castle was built in the nineteenth century following the vintage found a lock of a door of the building. Lafauche was the capital of an important barony until the Revolution; it was part of the deanery of Reynel, diocese of Toul and depended on the election and the Bailiwick of Chaumont, provost of Andelot.