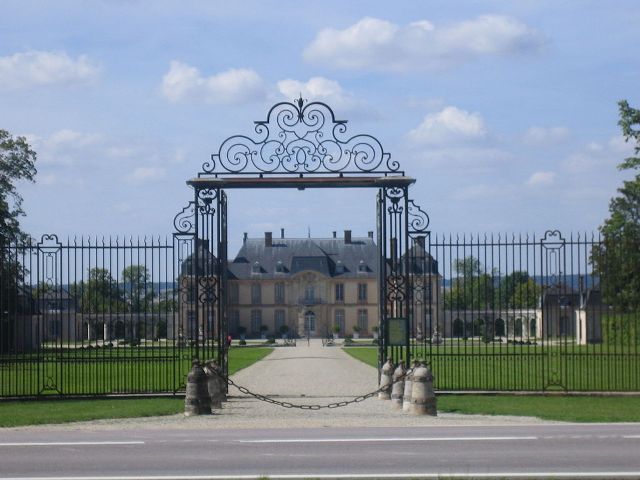 Location: La Motte-Tilly, in the Aube departement of France (Centre Region).
Built: 1754.
Condition: In good condition.
Ownership / Access: In good condition.
ISMH Reference Number: PA00078162
Notes: Château de La Motte-Tilly is located in the municipality of the same name in the department of Aube on the left bank of the Seine in less than 7 km southwest of Nogent-sur-Seine. Domestic common are the subject of a registration as a historic monument since September 2, 1943. The castle, the chapel (facades and roofs), small pavilions on the courtyard (facades and roofs) and common (facades and roofs); the courtyard, the jump-ha, the entrance gate of wrought iron, and finally, the park, with its terraces and its channel are subject to a classification as historical monuments since 16 September 1946. Open to the public since 1978, the castle is managed by the Centre des monuments National.The name of La Motte-Tilly appears for the first time in 1369. No doubt this motte, defense work, she occupied the site of the imposing medieval castle still remaining in the eighteenth century and, apparently -he, protected a ford on the River Seine, located a few hundred meters below. This old castle surrounded by a moat (which we still see the ground) was the river at the end of the current fleet. It belongs to the lords of Trainel and the Raguier, to Elbeyne and Bournonville. During the year 1710, the manor and lands of La Motte-Tilly expire by marriage to the family of Noailles. Louis XIV, in recognition of services rendered by the Duke Marshal Adrien Maurice de Noailles, erect this land in the county. In poor condition, no longer to the taste of the time, the old feudal fortress was destroyed and part of the materials will be reused in the construction of the present castle.

How To Get To Château de La Motte-Tilly (Map):