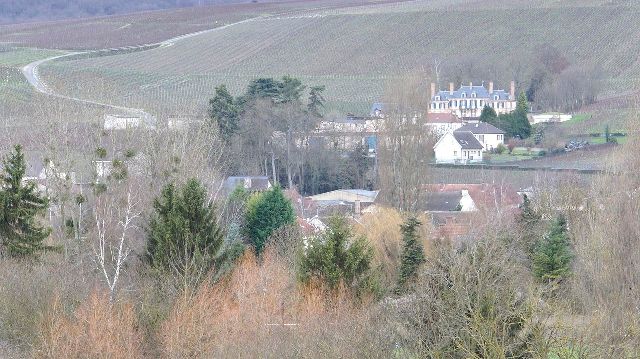 Location: Pierry, in the Marne departement of France (Champagne-Ardenne Region).
Built: 1734.
Condition: In good condition.
Ownership / Access: --
Notes: Château de la Marquetterie is located in the town of Pierry, near Epernay (Marne department, region Alsace-Lorraine-Champagne-Ardenne). It belongs to the Taittinger group.The original manor house was built from 1734 by a nephew of the architect Gabriel on order of a rich and ancient family of cloth merchants in the region. This family also managed to acquire from the Benedictine monks neighboring vineyard which was exploited by the Brother Oudart, one of the creators of champagne fathers. It was a beautiful vine clinging to the hillside which later became famous under the name "Les Folies of marquetry." The owner of the years before the French Revolution was the writer and philosopher Jacques Cazotte, guillotined in 1792, who received home Voltaire and Andre Chenier. During the Great War, the area was near the fighting. In September 1915, the General Edouard de Castelnau installed his headquarters from which he directed his victorious offensive. He was joined by General Joseph Joffre, future Marshal of France. In 1932, Pierre Taittinger acquired with the champagne house "Forest Furnaces" the castle of the Marquetterie he had discovered during the war of 14-18 and for which he had a heart stroke. It was then a property of the eighteenth century whose vineyards of the Champagne vineyards were planted in Chardonnay and Pinot Noir. This large building was to become his family home where all met the Taittinger and wine center pivot of his champagne house. At the end of World War II, the castle was occupied by one of the bands of the US Seventh Army.