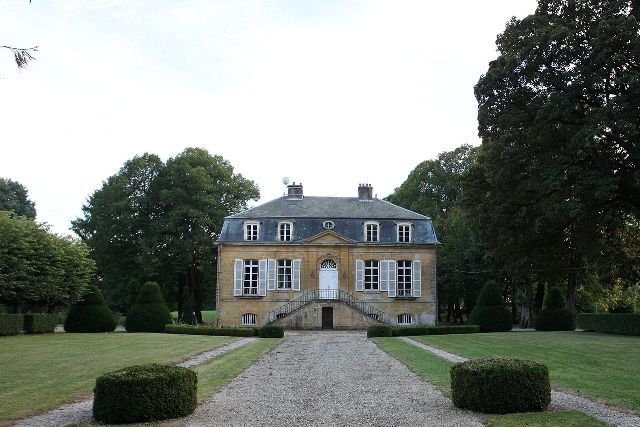 Location: La Berlière, in the Ardennes departement of France (Champagne-Ardenne Region).
Built: 18th century.
Condition: In good condition.
Ownership / Access: Privately owned.
ISMH Reference Number: PA00078347
Notes: Château de La Berlière is a castle located in La Berlière, France.Castle La Berlière is closer to the eighteenth century follies of a castle. The building, yellow stone, is surrounded by a park with linden trees and box trees. It has a significantly elevated ground floor and a floor under a Mansard roof. Five bays structure the facade and a porch, with a double flight staircase, flat pilasters and a low triangular pediment. Inside, the fireplaces come, they say, of the abbey of Belval. In bedrock were located kitchens and common, in vaulted rooms.The building was built in 1740 by Mathieu Fumeron, Lord of The Berlière, Knight of the Order of Saint Louis, commissioner of war. His son chose to emigrate. The property is sold as national1 well. In May 1940, the castle serves as a command post (CP) General Grandsard, head of the 10th Army Corps, under the command of General Huntziger, commander of the 2nd Army. General Huntziger is also a tour of inspection to the castle of La Berlière May 13 in the late afternoon, when a report of the 55th Infantry Division Grandsard learns to German breakthrough and crossing the Meuse the enemy south of Wadelincourt.The building is registered as historical monuments in 1984.