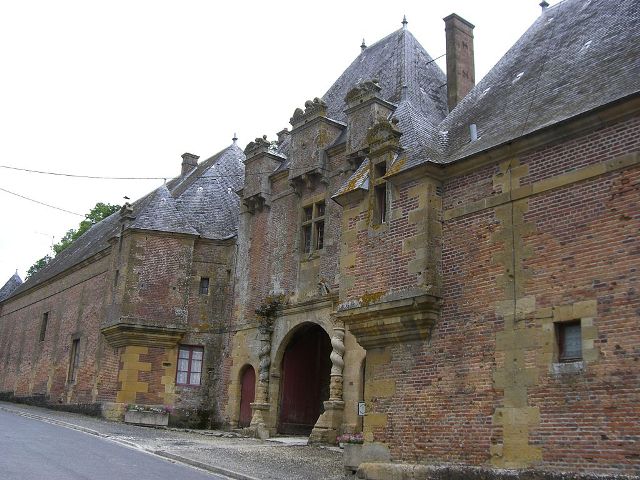 Location: Grandpré, in the Ardennes departement of France (Champagne-Ardenne Region).
Built: 1618.
Condition: In good condition.
Ownership / Access: Privately owned.
ISMH Reference Number: PA00078445
Notes: Château de Grandpré is consists of remaining elements of a Château in Grandpré, France, built by the Joyeuse, counts of Grandpré, in the late sixteenth and early seventeenth century.What remains today of the chateau de Grandpre, first we notice the remarkable gate tower of Justice, along the small road sloped up towards the hill. This door is surrounded by busy brick facades of non salient harpées chains made of local stone which is a yellowish limestone. In the center, in the recess, the porch is topped by a pediment scroll that support two twisted columns. Placed on carved bases, these columns are decorated with twisted foliage and support a cornice and a bare table, flanked by small scrolls. Overcoming the cart door, crossed a large mullioned window illuminates the floor of the tower. At the birth of the roof with a roof to the French, stand three bretèches, each supported by three consoles and crowned with a pediment accented balls, corbels, and scrolls. These bretèches were supposed to defend the two side pedestrian gates and central driveway and mullioned window that overlooks it. This great semicircular driveway arch is flanked by two pedestrian doors also semicircular. All of this input, rather remarkable, is pure Louis XIII style, rare baroque style. The set is dated: 1618.The two pavilions that frame the door of Justice are barlongs buildings used for common, pierced with few openings to the outside and are equipped each of their angles of a square watchtower built on three moldings jump. The scarcity and smallness of open windows in the exterior wall of the long buildings and the presence of three bretèches above the door denote a defensive concern-even if it is more symbolic qu'efficace- not to resist a siege but at least to guard against a little "coup de main" or deter potential thieves. At the same defensive mind, pavilions have some small gunboats better able to serve individual firearms (arquebuses and muskets) rather than small pieces of artillery.The three passages through the door turn are surmounted by elegant arcades in ribbed vaults on pillars.Courtyard, there is the triple portal and three dormers cut pediment substitute for bretèches.