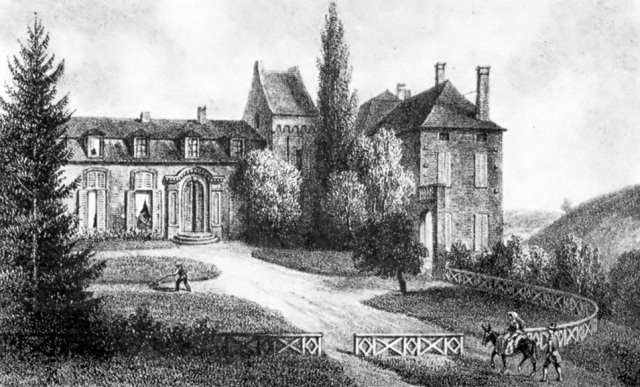 Location: Cirey-sur-Blaise, in the Haute-Marne departement of France (Champagne-Ardenne Region).
Built: 1643.
Condition: In good condition.
Ownership / Access: Privately owned.
ISMH Reference Number: PA00079030
Notes: Château de Cirey is located in the town of Cirey-sur-Blaise in the department of Haute-Marne.It owes its fame to Voltaire who, fleeing Paris after publication, without his knowledge, his Philosophical Letters, found refuge from 1734 to 1749, invited by his mistress Émilie du Châtelet, Châtelet Marquise, another brilliant mind of the eighteenth century.The present castle was built in 1643 by Jules-Louis Marquis du Chatelet on the site of a castle razed in 1633. When Voltaire arrives at Cirey in 1734, the castle fell into ruin. With the agreement of Florent-Claude Marquis du Chatelet, he erected an additional wing, decorated with a beautiful exterior door carved from a drawing by the writer (marine decor with shells and two faces of Neptune , one awake and one asleep). "The chemist snowman you propose should take the party to come here, there would be complete freedom, not bad housed, well fed He should say Mass on Sundays and holidays in the castle chapel. "(15 July 1737); "It can bring its chemistry instruments. We must instruct you eat very rarely with Madame la Marquise, whose hours are not set too, but there the Count and his son table . a tutor, a man of wit M. du Chatelet, the father, is often eat together and sometimes we all sup "(25 July); ". Send me the marble fireplaces, two patched statues, two pedestals, the two bowls with their feet, until something better I could put in my gallery Luxembourg's prints" (7 October); "Our chemistry is returning after watching the scene and ordered the laboratories; I will make him accommodate a small apartment with a garden that will be the master" (30 October). Voltaire to Father Moussinot (Courtat, "The real letters from Voltaire to the abbot Moussinot" (Paris, A.Lainé 1875, pp 82 and 84 -... Arch people).

How To Get To Château de Cirey (Map):