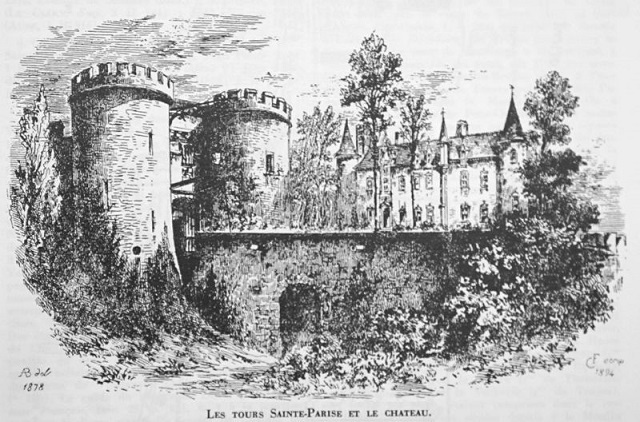 Location: Chacenay, in the Marne departement of France (Champagne-Ardenne Region).
Built: 13th century.
Condition: --.
Ownership / Access: Privately.
Notes: The castle of Chacenay is located on the commune of Chacenay, in the Aube. It was in 1988 that Panos and Lina Pervanas, became masters of the place to delicately restore the charm of the buildings.This charming place is attested as early as 1075, and by its history, it was the stronghold of many great families over time. Its history is rather difficult to synthesize because the towers-Parisse, the keep and the dwelling were not all under the same authority. The donjon was of Burgundy and was under the control of the king, the Grosse Tower was raised by the Counts from Troyes, but the rest, although coming from Troyes, came from the bishop. The stronghold of Sainte-Parisse was dismembered from the main fief of Chacenay in 1278 for Erard D'arcis. The first stone castle is attested in 1285 in two distinct parts: the Sainte-Parise towers connected to the castle of habitation seigneurial by a gallery connected to the rampart. The main building was remodeled in the 15th century by Lassus, who was the architect of Notre Dame in Paris. The interior decorations were entrusted to M. Vivet. Located in the heart of the forest, in the heights of the village, it was in the Middle Ages an impregnable fortress with its ramparts, its keep (today destroyed), its ditches, drawbridge and towers Sainte-Parise. Jeanne de Choiseul, a lady of Chacenay (her great-grandmother Jeanne d'Arcis, wife of Guillaume de Grancey, sire de Larrey, made the connection with the former lords of Arcis, Pisy and Chacenay of the Ansar family of Montreal) Was attached to the court of Burgundy. Its castle was besieged in January 1474, taken by assault and largely ruined by Leger de Dinteville, who commanded the troops of Louis XI against Charles the Bold.

How To Get To Château de Chacenay (Map):