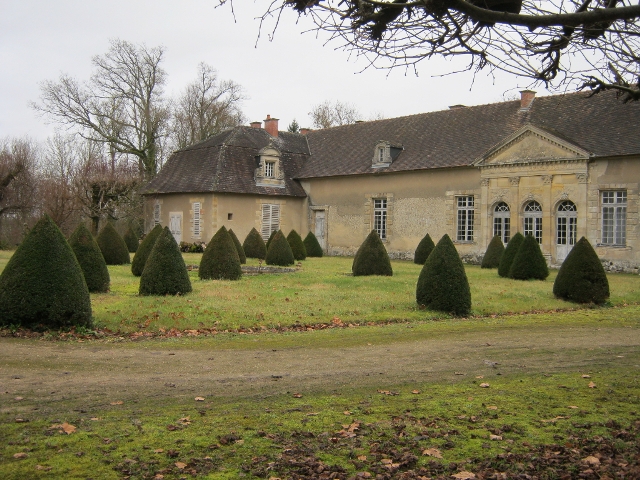 Location: Étrepy, in the Marne departement of France (Champagne-Ardenne Region).
Built: 12th century.
Condition: In good condition.
Ownership / Access: Privately owned.
ISMH Reference Number: PA51000017
Notes: Château d'Étrepy is located on the town of Étrepy in the department of Marne.The monument is the subject of a registration as a historic monument since 28 November 2011.The presence of a castle in Étrepy at the confluence of the Saulx and the Ornain and the limits of Champagne land and Empire, is known since the twelfth century. The wide moat still visible today bear witness to this ancient state, however, the buildings were rebuilt and transformed several times. First after the war 100 years by Johan Nyvenheim (a brick tower seems the only vestige of this early work) and then in the early seventeenth century. This new campaign works are preserved walls with framed bays harp bosses and overcome high stone dormers. The current provisions are the result of the changes made in 1741 by Francis Lorins and his wife Anne du Tertre. They appealed to the contractor of Bar-le-Duc Claude Couchot to whom we owe in particular the creation of a monumental decoration on both facades of the house corresponding to the installation of a large living room decorated with moldings , modification of two isolated houses by adding mansard roofs and a bell tower, removal of walls and curtains of the construction of a bridge replacing the old drawbridge. On 6 September 1914 the castle was burned down by enemy troops. The entire cover and inside the main building were destroyed. The restoration work is undertaken from 1917 to 1927 under the direction of architect André Ventre. The conservation of stucco moldings of the large living room (which had been taken shortly before the war) allowed them happy restitution. The castle is built on a median rectangular, surrounded on all four sides of wide shallow ditches fed by a derivation of the Saulx. The map of the buildings conforms to this earth full and forms a rectangular courtyard surrounded by buildings and curtain walls. An elongated wing occupies the entire north side with two small wings at right angles. In front rise two pavilions of rectangular plan, the southwest corner serving home, the other at the southeast corner houses the chapel.A bridge crosses the moat in the center of the face is.