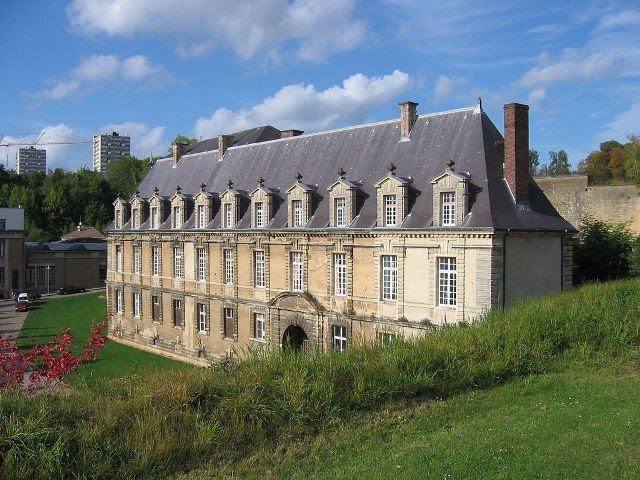 Location: Sedan, in the Ardennes departement of France (Champagne-Ardenne Region).
Built: 16th-17th century.
Condition: In good condition.
Ownership / Access: Privately owned.
ISMH Reference Number: PA00078517
Notes: Château-bas de Sedan also called castle of the Princes, or Palace of the Prince, is a castle located in the castle in Sedan, France. This building was built at the height of the Principality of Sedan (start of construction in 1611), thirty-one years before its annexation by the Kingdom of France. This is an interesting example of architecture of the early seventeenth century, with the particularity of a front side different city facades of the inner courtyard.The style is the hinge between the architecture of the French Renaissance and classical architecture. One feature of this T building consists of finding the differences between two facades. Under high roofs, the decor of the yard side facade consists of paired pilasters, quite tall windows with small panes and skylights. These skylights are topped by a triangular pediment or circular, alternating.The stones are from a nearby quarry.Side town, the facade mixes stone size and blocking plaster. His eleven bays are decorated with bosses vermiculated chaining decor, leaded windows and dormers surmounted by a stone vase. The overall look is a bit more martial, to register without doubt the architect as one of the buildings of the castle, even if he has not the feudal appearance and if it is clearly a palace, a mansion. The large portal also evokes a city gate. The building was originally a bank ditched the gate being provided with a drawbridge and up the entry point of the whole castle, before crossing a new bridge and access the châtelet2 great. A building set back slightly extends the main body.April 15, 1611, Jean Chardon, master voyer Prince of Sedan, Henri de La Tour, Duke of Bouillon, launched the construction of the building, having destroyed what remained of earlier walls and the ancient district of the Mill, backyard of château.The plans are the work of Salomon de Brosse, the Protestant who became the talented architect of Queen Marie of Médicis4. Bouillon Duke wants to have a more consistent residence to the tastes of the time and most comfortable apartments in the princely castle fort. princely residence from 1614 to 1642, the palace became, after the annexation of the principality by France, the residence of the governor of the city. It is surrounded by moats and with a rocking drawbridge spanning the gap. At the rear, the T extends from one hall to the carriages inside a courtyard also includes stables. From the Revolution, all used as barracks. The interior does not survive this military employment, except a staircase with carved wooden balusters and a large stone fireplace in the vaulted basement.The ditches were filled in 1878, and the drawbridge removed. Hall carriages to disappear in a fire at 1880. The building is classified as historical monuments in 1952 and registered in 2003.