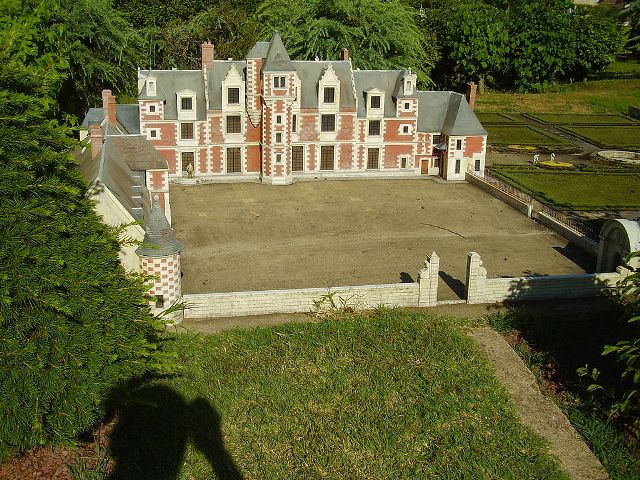 Location: Bourges, in the Cher departement of France (Centre Region).
Built: 1443.
Condition: In good condition.
Ownership / Access: --
Notes: Palais Jacques-Coeur said the Causeway Hotel 1 located in Bourges, is a masterpiece of late Gothic architecture. This building is born of the will of the wealthy merchant Jacques Heart to build a 'great' home 'in his hometown. Built in the fifteenth century foreshadows the mansions that will flower in the Renaissance. However, the treasurer of Charles VII lived there forever. This is, by the elegance of its architecture, the richness and variety of its decoration, this palace is considered one of the finest and most sumptuous civil buildings of the Gothic period. Begun in 1443, this splendid mansion was substantially complete in less than ten years, at a cost of 100,000 crowns. Jacques Heart disgraced in 1451, did little advantage, since he was imprisoned for three years before to escape and take refuge in the Greek Islands, where he died in 1456. Restored to his heirs in the year following his death, the palace fell on diverses.Acquis fortunes by Claude L'Aubespineet his brother bishop Limoges2. He was briefly owned by Jean-Baptiste Colbert in 1679 and was acquired soon after by the city of Bourges. Purchased by the State in 1925, it has since been completely restored. The Jacques Heart palate been a classification as historical monuments by the list 18403. The palace, state property is managed, lively and open to the public by the National Monuments Centre."This palace in Bourges, which I had hitherto paid little attention and which I decided to create to please Mace, took me in an unexpected spot. [...] Mace could let everyone see the imposing wall of a castle worthy of us and witness our new power. But arriving at the other side, in the alleys that descend from the cathedral, where I spent my childhood black and gray, I will have the pleasure of bringing forth a stone image of the future, testimony that life can be different, not just elsewhere. Soon through the door on that side, modest door like the Italian palace, we would enter a courtyard and I imagined a gay house, pierced huge openings, where the few visible walls would be decorated with sculptures, fine columns, frescoes ... " - Jean-Christophe Ruffin, The great Coeur. "I deeply loved this building. [...] His division between two worlds, on one side the old, which apparent to a stately home, the other an air and Italy already oriental refinement. Everywhere memories of my travels, these palm trees carved on the door, the naves drawn on the windows and the stone figures of my manager and our oldest servants waiting for me, leaning out the window ... " - Jean-Christophe Ruffin, The great Coeur.

How To Get To Palais Jacques-Coeur (Map):