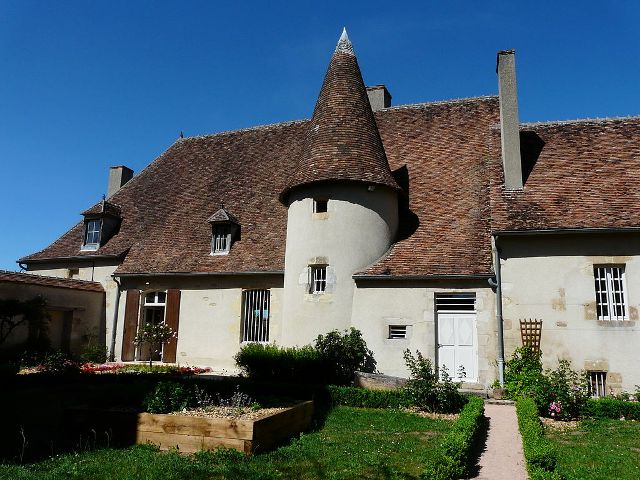 Location: Châteaumeillant, in the Cher departement of France (Centre Region).
Built: 15th-16th century.
Condition: In good condition.
Ownership / Access: --
Notes: Maison Grégueil, also called Little Castle is a mansion located rue de la Victoire in Chateaumeillant, in Cher. It dates from the late fifteenth century and was rebuilt in the sixteenth century. It houses the Émile-Chénon museum. The house is listed as a historic monument since 1964.La the oldest part of the house (low and high rooms) dates back to the fifteenth century. In the sixteenth century, the distribution of openings is changed and a stone staircase turret is added; it is the turret that is seen in the photo. One wing of the house is lying. In the nineteenth century, the divisions are included, as well as paneling and joinery which may date from the Romantic era and is inspired by a Louis XVI decor. Work has helped uncover a lime coated decor covered with decorative paintings, a rare source of civil tapestry décor. These fragments consist of linear scrolls with leaf tracery, the whole constituting a bluish brown shades on a light background. The window jambs are adorned with windings butts on yellow background. Part of paint between the fireplace and the north facade has Gothic inscriptions from the late fifteenth century.