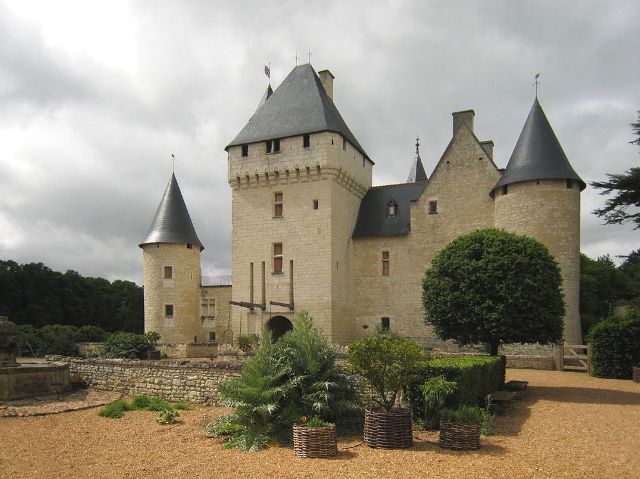 Location: Lémeré, in the Indre-et-Loire departement of France (Centre Region).
Built: --
Condition: In good condition.
Ownership / Access: Owned by a Private company.
ISMH Reference Number: PA00097802
Notes: Château du Rivau is a stately fortress whose first foundations date back to the thirteenth century. Located in Touraine 10 min drive from Chinon in the town of Lémeré in the French department of Indre-et-Loire, the Rivau is one of the castles of the Loire World Heritage of UNESCO. It is the subject of rankings as historical monuments since July 1918 (castle) and August 1999 (common) and an entry in February 1988 (farm) . The Rivau visit several areas: medieval architecture, Renaissance architecture, art history, heritage, contemporary art, literature and green setting.The thirteenth, the Rivau is a strong house. This castle of Touraine was fortified in the fifteenth century and humanized the Renaissance. It is both an impregnable fortress and a pleasant place to live. Located in the heart of Anglo-French conflict, the castle Rivau a strategic positioning. It overlooks the Vienne Valley and Veude and the ability to monitor the major roads. In the sixteenth century, the building that closed the quadrangle of the castle was destroyed. At the same time, the Gothic windows of the west facade of the castle were enlarged and decorated with sculptures. The forecourt is endowed prestigious stables. In the seventeenth century, the buildings south of the forecourt were reconstructed and covered with hollow tiles for low slope roofs did not allow the laying of the slate which requires a steep slope. Local tradition used the cover slate for noble buildings and tile for commercial buildings. In the eighteenth century, there was no modernization of the frame but the roof gardens of Rivau were surrounded by walls. A bridge, now defunct, seems to have been thrown at this time on the west moat. The moat was filled is. Very large land Rivau was planted with sainfoin and walnut trees and 45 hectares of vineyards. These rich lands were coveted and the castle became "Report castle" more undergoing no modification. He kept well all the characteristics of its construction. In the nineteenth century the chapel north of the "Secret Garden" was destroyed (1880). Windows "small wood" replaced the mullioned windows, destroying the medieval harmony. The castle became a wheat storage place and forgot its former splendor.

How To Get To Château du Rivau (Map):