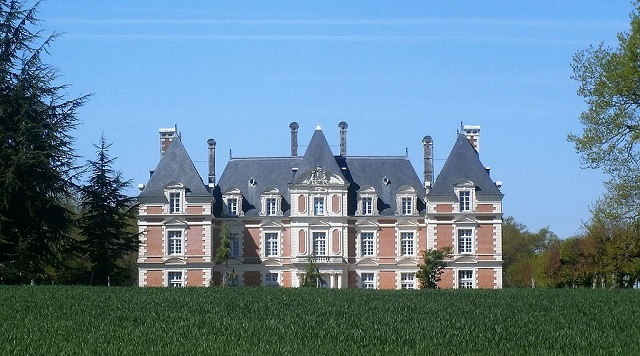 Location: Orbigny, in the Eure-et-Loir departement of France (Centre Region).
Built: 1880.
Condition: In good condition.
Ownership / Access: Law de Lauriston-Boubers.
Notes: The castle of Mousseau is a castle located in the commune of Orbigny, in the department of Indre-et-Loire, in France.Le Mousseau was a stronghold of Montrichard; The card of Cassini designates it under the name of "Monceau", but the spelling "Mousseaux" is also found. During the Second World War, the Lecoz maquis, led by Georges Dubosq, an adventurer of justice who calls himself "Captain Lecoz", moved to the castle in the early days of September 1944. From there he carried out several operations Of real Resistance but also of looting of the surrounding dwellings and summary executions until the beginning of October when this maquis, become too cumbersome, is asked to leave the region to join the army of General de Lattre de Tassigny, Towards the Haute-Saône and the Territoire de Belfort.Owned by the family of Lauriston, it is built according to the neo-Louis XIII style in cut stone and bricks, unusual architecture in the region, between 1876 and 1880. A chapel is arranged at the last level of the central body. A set of courtyards completes the building.