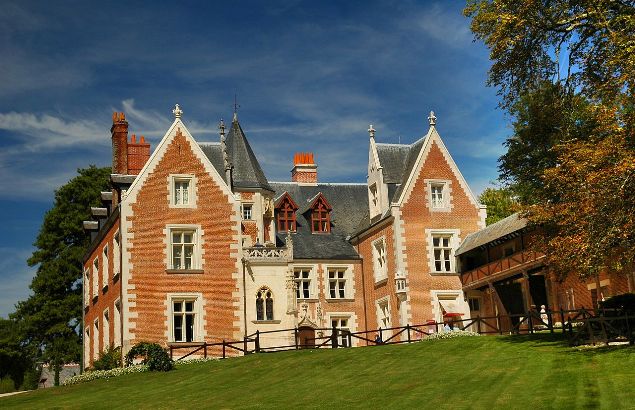 Location: Amboise, in the Indre-et-Loire departement of France (Centre Region).
Built: 15th century.
Condition: In good condition.
Ownership / Access: Privately owned.
ISMH Reference Number: PA00097504
Notes: Château du Clos Lucé, formerly called the Cloux manor house is a residence located in France, in the city center of Amboise in the heart of the Loire Valley, a Unesco World Heritage. This is where Leonardo da Vinci, invited by François I, lived three years, 1516 to his death on May 2, 1519. It was built in 1500. As home of Leonardo da Vinci, it is the subject of a classification as historical monuments by the list of 1862. The Château du Clos Lucé is today a place of interpretation, and synthesis of knowledge which aims to allow the wider public to discover the universe of Leonardo da Vinci. We discover the entire universe of Leonardo da Vinci. It is located in the center of Amboise.The Chastelet du Cloux was a former fief Castle Amboise3. The land was annexed to Lucé ended in the fourteenth century. By document of 26 October 1460, Pierre du Perche gave Marc Rabouin place of Cloux and received in exchange the Grange-aux-Lombards. This area passes shortly after at the hands of the religious Moncé Priory, who sold it, by act of 26 May 1471, to Stephen Wolf, butler and first usher armes4 and advisor to King Louis XI and bailiff d'Amboise. The buildings fell into disrepair, it was he who gave the Clos Lucé its present appearance, with "its square tower, its watches, connected to the right wing of the building by a covered gallery (...) walls pierced soon gothiques5 of windows. " The home is built around an octagonal corner tower with a spiral staircase surrounded by two 2 floor buildings built square. The elegant facade of red brick and tufa stone door architectural mark the fifteenth century. November 22, 1490, Charles VIII bought the Clos Lucé Le Loup Etienne for the sum of 3500 crowns. Charles VIII transformed the medieval fortress castle agrément.Le the castle becomes the summer residence of the kings of France. Charles VIII ordered the construction of a chapel for his wife, Anne of Brittany, who lived there until his departure for the Royal Castle of Blois. The oratory contains murals by later followers by Leonardo da Vinci: an Annunciation, a Last Judgment and the Virgin light located above the door, which would have given its name to the Clos Lucé. Charles IV of Alençon and Marguerite de Valois settled there in 1509. In 1515, the Duke of Alencon sold the Château du Clos Lucé the mother of Francis I, Louise de Savoie. Louise de Savoie, regent of France, lived and raised her two young children, the fiery Duke of Angoulême, future Francis I and Margaret of Navarre, woman of letters and author of the Heptaméron.

How To Get To Château du Clos Lucé (Map):