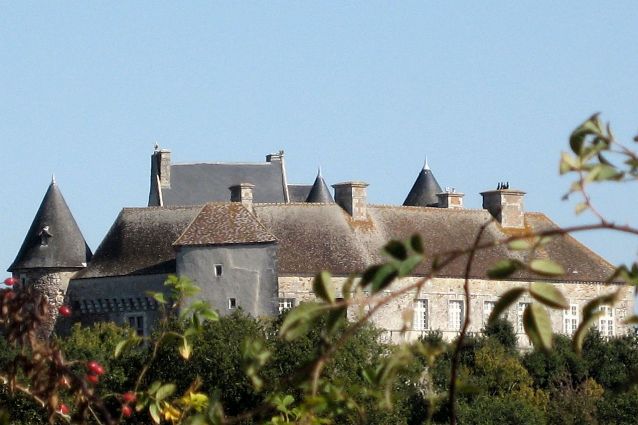 Location: Rosnay, in the Indre departement of France (Centre Region).
Built: 13th century.
Condition: In good condition.
Ownership / Access: --
Notes: The Château du Bouchet is a French medieval castle, located on the territory of the town of Rosnay, in Indre department, in central France, Loire Valley.The castle was built between the eighteenth and seventeenth centuries. The origin of the construction of the castle is not known, but during excavations carried out in 1921, a Gallo-Roman coin was found near the building and suggests that there has been there very early one dwelling. In the twelfth century, the castle is the possession of the lord Guy Sénebaud, comrade in arms of Philip Augustus. During the Hundred Years War (fourteenth century), the castle became the property of Pierre de Naillac. At his death occurred around 1360, the castle returns to his widow, Héliotte de Prie, who had already left for Artaud Ussel, band leader. This book Bouchet Gautier Mellot, English supporter who in turn bequeathed it to another English supporter Jannequin Durant, leaving it to his wife Isabelle Bret and his daughter Sybille Leaf. Around 1370, the castle was taken over by Pierre d'Oradour, from a great family Poitevin, first cousin and closest relatives and heir of Peter Naillac. He then asked the king of France to confirm the possession of the castle that Charles V will be in March 1371. Le Bouchet remained in the family until Oradour 1451 or it becomes the property of the family Taveau Mortemer. In 1447, in a trial, it is said that Lord Louis du Bouchet Oradour, said Sandebaud, is a leper and his wife Jeanne de Maille is forced to live with him, but she escaped with his uncle Geoffroy Taveau, upsetting the husband will die in 1449. In 1519, the castle was owned by Gabriel de Rochechouart, first Duke of Mortemart. In 1789, Victurnien Mortemart emigrated and the castle was seized by the revolutionary authorities. Pierre Huard La Vignauderie, captain of the hunt the Duke of Mortemart, bought in the 1796, to return it to the Duke on his return to France in 1802. In March 18082, the castle was sold by the Duke of Mortemart, the Mayor of Rosnay Victor Hérault of Verona, which descends the current owner, Chantal Hérault La Verona. The monument is the subject of a classification as historical monuments since 23 September 1955 for its facades and roofs and on January 4, 1960, for fireplace.

How To Get To Château du Bouchet (Map):