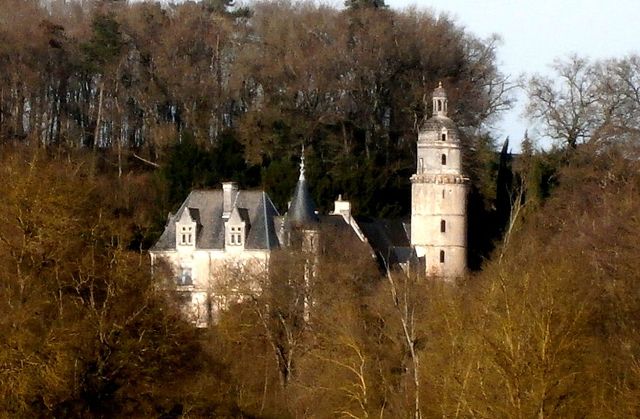 Location: Saint-Quentin-sur-Indrois, in the Indre-et-Loire departement of France (Centre Region).
Built: 14th century.
Condition: In good condition.
Ownership / Access: --
Notes: Château des Roches-Saint-Quentin, whose construction lasted from fourteenth to the sixteenth century, is located in Saint-Quentin-sur-Indrois, French commune of the department of Indre-et-Loire, in the Centre region, about 1 km east of the town center. He was born Jeanne-Marie de Maille in 1331, before, until the sixteenth century, the property of the Smoke family, who also owned the fief of Genillé. This private castle, parts of which are on the list of historical monuments registered under buildings can not be visited.The first castle belonged to the family of Maille. It was there that, on 11 April 1331, Jeanne, daughter of Hardouin VI Maille, lord of Saint-Quentin and Rillé and Jeanne Montbazon2 and become Blessed Jeanne-Marie de Maille; only the tower which flanks the east housing main body époque3 this date. In 1449, Jean Puy, owner of the castle, obtained permission to fortify it. In January 1488, Pierre Morin bought the castle, but he sold it one month après4 Adam Smoke, personal physician and advisor to Charles VII, Louis XI and Charles VIII5, and already owns the neighboring fief Genillé6. In 1515, Adam II his son obtained the grouping in one of his lordship land Genillé and Saint-Quentin, whose parish stronghold and château2. In 1536; Adam II Fume obtained from the king permission to open markets and two annual fairs on its domaine7. It's the Smoke family who built most of the actuel8 castle. In the early eighteenth century, the castle and all the lordship of Saint-Quentin and Genillé, they fell due, through marriage, to family Menou3. At the time of the Revolution, the arms that adorned the main gate of the castle were martelées9. The last pavilion was added during a restoration carried out in the early twentieth century.

How To Get To Château des Roches-Saint-Quentin (Map):