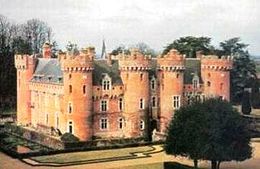 Location: Villebon, in the Eure-et-Loir departement of France (Centre Region).
Built: 20th century.
Condition: In good condition.
Ownership / Access: Privately owned.
ISMH Reference Number: PA00097237
Notes: Château de Villebon is a twelfth-century moated fortress and decorated with a Renaissance courtyard which is in the Villebon municipality located one hundred and fifteen kilometers southwest of Paris in the department of Eure- et-Loir region and the Centre-Val de Loire.he castle was built of brick in the late fourteenth century by Jeannet Estouteville. It cites as Lords of Beauvau John IV (1421-1503), Thibaud de Sancerre (?) And Maximilien de Bethune, duc de Sully, who lived there 24 years and died in 1641 The house was visited by kings Charles VI, Louis XI, François I and Henry IV. Its park is designed "to the French" and its prospects join the circle of Diana (statue) formed in the eighteenth century by the sixth Duke of Sully. On 6 October 1812, the Marquis de Pontoi-Pontcarré acquit with the land of Aubespine for 900,000 francs; it was restored at great expense by the Jules-Frédéric son Paul (1817-1903) Marquis of Pontoi Camus Pontcarré, general counsel from 1848 to 1857 member February 8, 1871, the mayor of Villebon from 1843 to 1903; he married September 17, 1839 Marie-Elisabeth Denois (+ 1897), daughter of Baron Denois, former Consul General of France. April 30, 1853, on request of the Prefect of Eure-et-Loir and opinions of Prosper Mérimée, inspector of historic monuments, it was proposed to classify the castle ( "the owner, even without a promise of next grant, is willing to take commitment for him and his successors to preserve the monument, to contribute to the cost of restoration, and let carry out the work, etc. "), but it will only be so March 5, 1927. He stayed there the following July, as he wrote to Madame de Boigne: "I'll Villebon where I spent two days (...) The castle is beautiful only it would take to do it right there spend. small million in furnishings. repairs have seemed easy to make, and I hope the Commission (Historical Monuments) will help. in the evening we raise the drawbridges and hear string noises that are no longer found that there and in the novels of Mrs. Radcliffe. " (General Correspondence 1853-1855, Privat, 1953, p.118.) He had to be there including the living room furniture, in addition to four chairs and four curtains, a rare sofa with "cheeks" side can be lowered to form couch, still covered in velvet and silk damask adorned with the figure of Sully's second wife, Anne de Courtenay (+ 1589), which is stored at the former hotel de Bethune-Sully in Paris, current seat of the Centre of National Monuments. The castle and chapel are classified historic monument since 1927, the loft of the seventeenth century listed since 1981. A replica of the castle served to Guerin Boutron chocolate advertisements in the nineteenth century, which was exhibited at the National Museum of Popular Arts and Traditions of Paris3. This reproduction is no longer visible since the closure of M.N.A.T.P. decision of the Minister of Culture and Communication Spring 2005; its dismantling began in 2010. Its collections transported to Marseille are the heart of a new museum, the Museum of Civilizations in Europe and the Mediterranean (M.U.C.E.M.), devoted mainly to the Mediterranean; reproduction is not exposed.

How To Get To Château de Villebon(Map):