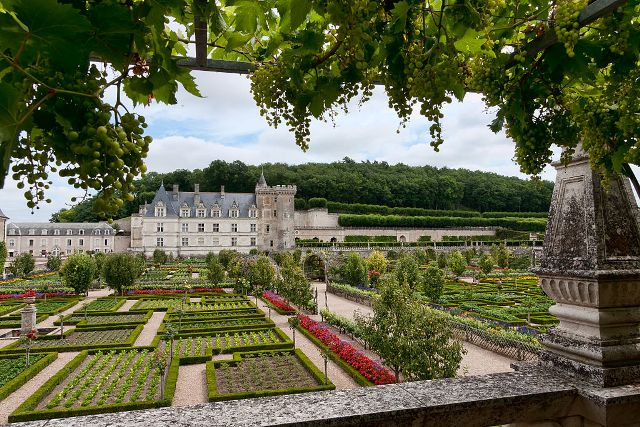 Location: Villandry, in the Indre-et-Loire departement of France (Centre Region).
Built: 16th century.
Condition: In good condition.
Ownership / Access: --
Notes: Château de Villandry is a Renaissance castle architecture Loire, located 15 km west of Tours, on the county road D7. Restored by Joachim Carvallo and his wife Ann Coleman, the castle is known for its six gardens: its keep dominating the vegetable garden (1 ha), an ornamental garden with high boxwood, a classic type of water garden, sun garden created in 2008, the hedge maze and a simple medieval garden. A lawn tennis was reopened in 2010 the whole castle, gardens and park are listed as World Heritage of Unesco. The interior dates from the eighteenth century.It is in this fortress took place on July 4, 1189, "the Colombiers Peace" (name of Villandry in the Middle Ages), in which Henry II, King of England, came to Philip Augustus, King of France, concede defeat. This peace is an essential step of the triumph of the Capetian monarchy over the feudal lords, the first of which the Plantagenets, the vast area included the French Normandy, Brittany, Maine, Touraine, Anjou, Poitou and Aquitaine. In the fourteenth century, the castle became successively the property of the family of Craon, then that of Chabot. In 1532 it was acquired by Jean le Breton, who shaved an old fortress of the twelfth century, which it remains today only the foundations and tower can be made out behind the courtyard, to build the present castle. The Château de Villandry, completed around 1536, is the last of the great castles that were built on the banks of the Loire in the Renaissance; it was built by a finance minister of François I, Jean le Breton. Descendants of Jean le Breton Villandry retained until 1754, when Louis-Henri d'Aubigne, "Marquis de Villandry Savonnières, Cornuson, camp marshal and army of the king, lieutenant general of town, castle and Seneschal of Saumur, Saumur and Haut-Anjou ", sold the property to Count Michel Ange de Castellane, the king's army brigadier, ambassador to the Ottoman Porte, from one of the oldest and most illustrious families in Provence.

How To Get To Château de Villandry (Map):