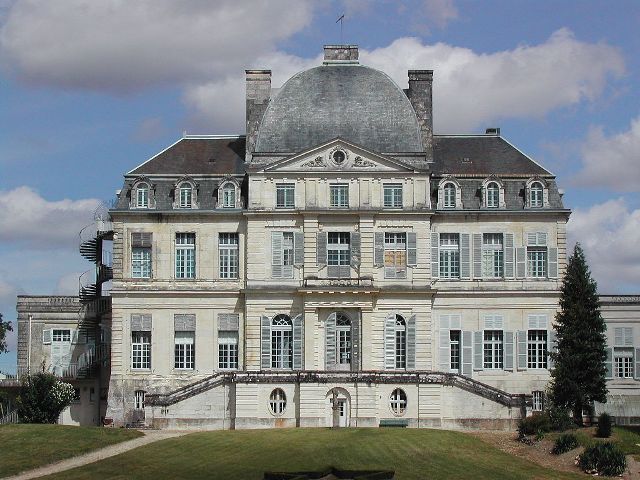 Location: Verneuil-sur-Indre, in the Indre-et-Loire departement of France (Centre Region).
Built: 1743-1756.
Condition: In good condition.
Ownership / Access: Owned by a Private company.
ISMH Reference Number: PA00098279
Notes: Château de Verneuil-sur-Indre is a French castle, which comprises both the remains of a castle dating back to the fifteenth century and partly a castle classic style located in the municipality of current Verneuil-sur-Indre in the current department of Indre-et-Loire region and the Centre-Val de Loire."Exceptionally, the construction of the new castle has not resulted in the destruction of the old castle that an unknown circumstance spared. It is curious that the spectacle of these two houses, which appear together for teaching purposes to allow comparison of the medieval castle with the modern castle, has not attracted the attention of an architectural historian. Verneuil history remains. "1 However, it is common in the eighteenth century, to keep the "big tour" of the previous feudal castle at the time of construction, or reconstruction of a new castle; or to integrate these elements in the body of the new building, such as the castle of Grillemont, in the municipality of La Chapelle-Blanche-Saint-Martin, 20 km west of Verneuil. In any case, the will of the owner is to keep the lord's symbol associated with the manorial rights, the "big tower" having replaced the dungeon in tardifs2 Gothic castles.

How To Get To Château de Verneuil-sur-Indre (Map):