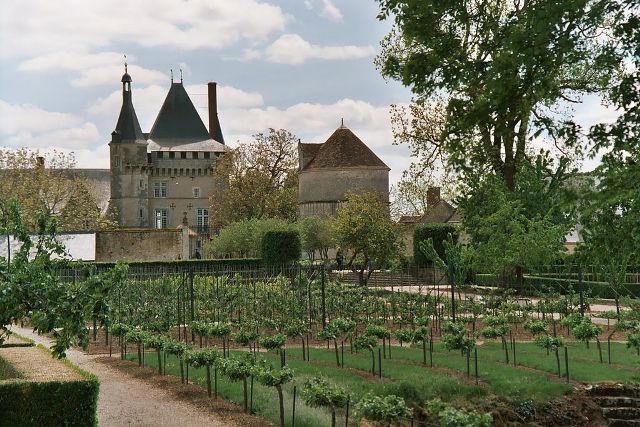 Location: Talcy, in the Cher departement of France (Centre Region).
Built: 1520.
Condition: In good condition.
Ownership / Access: State property.
ISMH Reference Number: PA00098615
Notes: Château de Talcy is a Renaissance castle located in the city of the same name. It is managed by the National Monuments Centre. The present castle includes a gatehouse, mutilated his turret northwest corner, and a wing who joined via a covered gallery, delimiting a courtyard. A well capped with a dome decorates it and is the flagship brand of the building. The wing consists of a ground floor and two floors. On the ground floor is a kitchen in a row, an antechamber and said chamber of Charles IX. On the first floor is a series of rooms and apartments serviced by a corridor. The estate includes an orchard, a barn with a wine press (dating from 1808) and a dovecote. Dovecote, circular tower, home to nearly 1400 pigeonholes, making it one of the largest in the region. It is provided with a scale on pivot allowing access to all the cavities in order to collect the eggs. The orchard was rehabilitated in 1996 by the landscape associated with Joëlle Weill Landscapes Workshop-Bruel Delmar. A windmill is connected to the domain. It was razed in 1956 and rebuilt in 1976.

How To Get To Château de Talcy (Map):