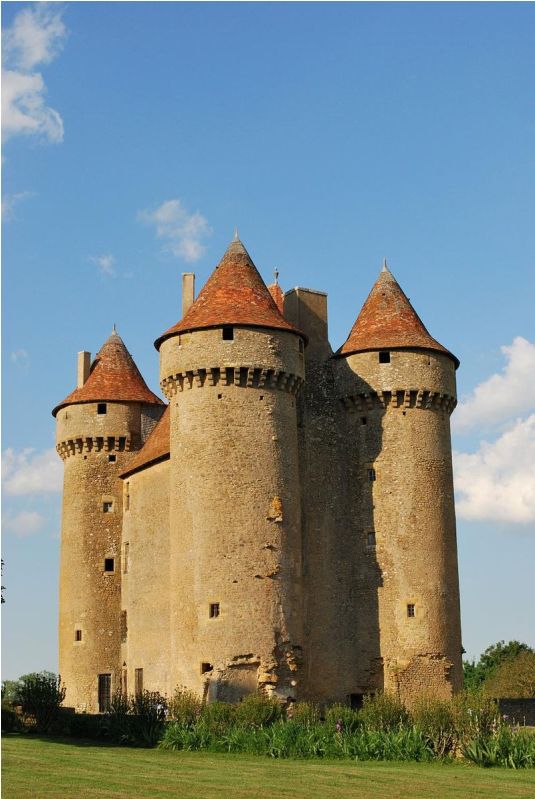 Location: Sarzay, in the Indre departement of France (Centre Region).
Built: 15th-16th century.
Condition: In good condition.
Ownership / Access: Privately owned.
ISMH Reference Number: PA00097467
Notes: Château de Sarzay was an imposing medieval fortress with 38 and 3 tours drawbridge. It is located in the town of Sarzay in the Indre department.This small village of Berry acquired the title of City in 1300. The parish depended on the Archbishop of Bourges. The Lordship of Sarzay belonged to the family of Barbançois since the mid-fourteenth century. It is a family of knights whose son won fame in the battles of the Hundred Years War. This family built the castle and remained owner until 1720; this manor was erected in marquisate in 1651. Initially, it is a castle mound surrounded by a ditch and defended by a chamber, there remains a chapel-tower. In 1360, the lord of Sarzay, William Barbançois, drove the English out of the city of La Châtre, before looting the city for its own account. Sarzay was at the limit of the kingdom of France, facing the Poitou, Limousin and Aquitaine, English possessions. 1440, John Barbançois built a building flanked by five towers, one serving the floors. The towers are crowned with battlements. He restrained the English invasion. Left intact the Hundred Years War, the Wars of Religion, the Fronde, of the Revolution. In 1538, in a judicial duel, Hélion of Barbançois, 70 years old killed François de Saint-Julien, under the astonished eyes of Francis.