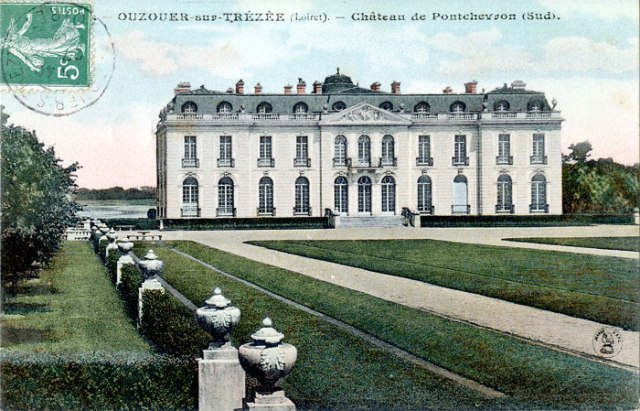 Location: Ouzouer-sur-Trézée, in the Loiret departement of France (Centre Region).
Built: 19th century.
Condition: In good condition.
Ownership / Access: Privately owned.
ISMH Reference Number: PA00098982
Notes: Château de Pont-Chevron is a French castle in Ouzouer-sur-Trézée, in the department of Loiret and the region Centre-Val de Loire.The castle was built by Count Louis d'Harcourt in 1900. The construction lasted 4 years and the castle was opened in July 1900. It currently belongs to the family of La Rochefoucauld. Two Gallo-Roman mosaics dating from the second century, probably remains of Roman baths were discovered in 1962 at the edge of the castle marshes. These mosaics were the subject of a major study which many experts have questioned the identity of a portrait of one of the two mosaics. From 1946 to the late 60s the park every summer was put at the disposal of Scouts of France who organized there national training camps or summer camps for scouts, sometimes of great magnitude. The castle opened in 1983 a museum of Pont-Chevron construction and two mosaics. The museum was partially renovated in 2008 to accommodate large and small. The castle is partially classified historic monument since 21 May 1987. The parties subject to a classification are the facades and roofs of the castle and the common entrance pavilion; inside the castle, the entrance hall, the staircase, the dining room on the ground floor of the rotunda, the fireplace in the lounge on the ground floor.

How To Get To Château de Pont-Chevron (Map):