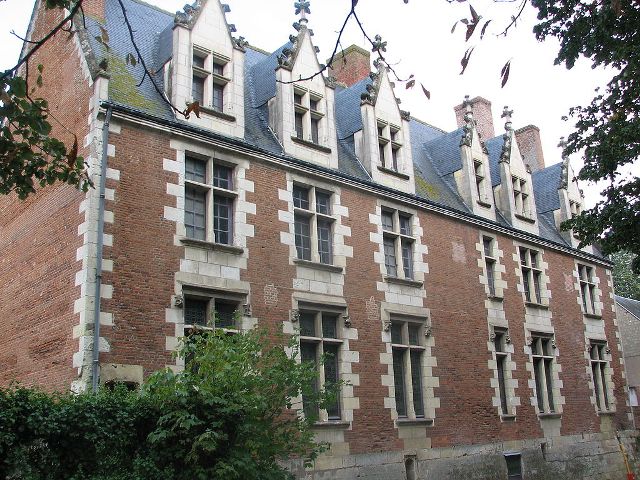 Location: La Riche, in the Indre-et-Loire departement of France (Centre Region).
Built: 16th century.
Condition: In good condition.
Ownership / Access: Privately owned.
ISMH Reference Number: PA00097942
Notes: Château de Plessis-lèz-Tours (formerly known as Montils-lèz-Tours) is a former royal residence located in the municipality of La Riche in Indre-et-Loire, near Tours. It was the favorite residence of King Louis XI who died August 30, 1483. Destroyed three quarters, it remains today the wing. It is the subject of a registration as a historic monument since April 12, 1927.The Lordship of Montils-les-Tours, which later took the name of Plessis becomes from 1444 a royal residence, where King Charles VII stayed several times. Then, the house was purchased February 15, 1463 by Louis XI, son and heir of Charles VII, for $ 5300 écus3, in order to build a new home. Previously, a fortress of the eleventh century was erected there, embellished with particular desired work by Charles VII. The construction of new buildings and dungeons intended by Louis XI will run until 1470. We know that the nickname wanting Louis XI is "the king of the merchants", and although the castle of Plessis-lèz-Tours confirmed as upon completion of the work, the king had installed in her castle the first of Tours silk workshop, held then by 17 workers he brought from Italy. The castle became the favorite residence of the king, who aménagea aviaries and a hunting dog kennel (great hunter but in recent years, while Louis gout sufferers) 4 and died there in 1483. The dungeon called "The Balue "is a vaulted arched, access to which was by a staircase under which, it is said, was imprisoned Cardinal La Balue. Plessis-lèz-Tours Castle and King Louis XI are intimately linked. However, the castle hosted many prestigious guests. Thus, from 1482 the confessor of Louis XI, St. Francis de Paule stayed there. Charles VIII, son of Louis XI and his successor, Louis XII, remained there, particularly in 1505, when Louis XII there was a long convalescence. Then the castle was the royal residence where took place the Estates General of 1506. On this occasion, we bestowed the title of "Father of the People" Louis XII, and decided the wedding of the daughter of the latter, Claude de France, with François d'Angoulême, future Francis. Note that for the second time in its history, the States General met at Tours, after those of 1484, summoned by Anne de Beaujeu, daughter of Louis XI, then regent to the minority of his brother, Charles VIII. Subsequently, François I, Claude of France, Catherine de Medici, Charles IX, Henri III made several stays. On 19 September 1580, the United Provinces of the Netherlands representatives gathered at the castle of Plessis-lèz-Tours with François Duke of Anjou, after signing a provisional treaty which the duke agreed to occupy the throne of the Republic Dutch as a sovereign, bearing the title of "Defender of the Netherlands freedoms." This treaty was soon broken. The castle of Plessis-lèz-Tours was also the scene of the meeting between Henry III of France and the future Henry IV, in 1589, after their quarrel. This meeting reconciled them, allowing them to confront together the Catholic League. The meeting was made possible by the assassination of the Duke of Guise by Henry III, head of the League, holding him under his yoke. Later, Henry IV took a few trips (and his son, Louis XIII), and also contributed to the development of the silk industry, by planting mulberry trees of Provence in the park. The successors of Louis XI fleshed the home, which was reworked and expanded. However, the court gradually abandoning the Touraine, the castle then began its decline. In the seventeenth century, its restoration is undertaken, but from 1781 the house became the workhouse of the city of Tours, in 1790, it was sold as national property, and in 1796, it is the destroyed three-quarters. During the nineteenth century, the castle housed a factory of lead shot, a corporate filing, and was even used as a farmhouse. These activities largely participated in its decay. In the twentieth century, the castle, however, experienced a period of revival thanks to Dr. Chaumier, who set a vaccinogen Institute and then undertook the restoration of the building, where restoration is still visible today. The castle now houses a theater company and European homes since 1999.

How To Get To Château de Plessis-lèz-Tours (Map):