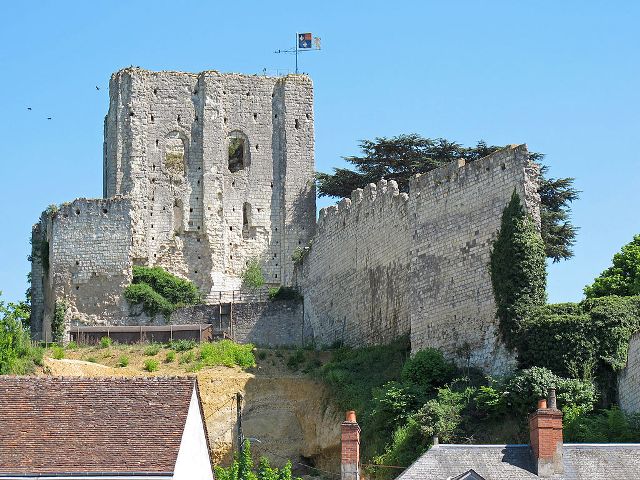 Location: Montrichard, in the Loir-et-Cher departement of France (Centre Region).
Built: 11th century.
Condition: Ruins.
Ownership / Access: Owned by the municipality.
ISMH Reference Number: PA00098513
Notes: Château de Montrichard is a castle, now in ruins, located in the heart of the town of Montrichard in the Loir-et-Cher. It is the subject of a classification as historical monuments since July 14, 1877.Montrichard Castle was built in the early eleventh century by the Count of Anjou Fulk Nerra. He served as his point of support in his struggle against the Count of Blois, Eudes II. The first faithful to whom he entrusted the guard was Roger Satan, lord of Montresor. In 1188, King Philip Augustus of France, after having made the seat, partially destroyed. In the eleventh century the lords of Amboise, faithful Counts of Anjou, went independent and found themselves in conflict with most of their neighbors. Hugh I d'Amboise took the stronghold of Montrichard in 1109. He made expansion and are the remains of the fortress we see today. Montrichard and Amboise were during the Middle Ages the two main strongholds of the Amboise family Perennelle Amboise transmitted the fortress by marriage, in the family of Harcourt, in the late Middle Ages. During the Hundred Years War, the 6, the castle is attacked by the English during the ride Black Prince. In 1461, Louis XI exchanged his lordships of Gourmay and Ferte-en-Bray against the lordship and castle of Montrichard, with William of Harcourt3,4. The king chose the castle as well as the Holy Cross Church to celebrate the marriage of his two daughters, Anne of France (1474) and Joan of France (1476).