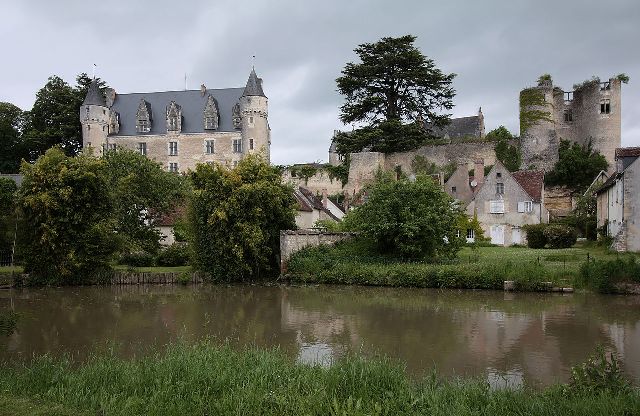 Location: Montrésor, in the Indre-et-Loire departement of France (Centre Region).
Built: 11th century.
Condition: In good condition.
Ownership / Access: --
Notes: Château de Montrésor is located in the southeast of the department of Indre-et-Loire (37), France, at about fifteen kilometers east of the town of Loches in the territory of the municipality of Montresor. A rocky outcrop hosted successively dungeon attributed to Fulk Nerra and integrated into the defensive system of the counts of Anjou, Touraine, a medieval fortress built by Jean IV de Bueil, Grand Master of the rafters of France, then a Renaissance dwelling built by Imbert Batarnay, influential figure with four kings of France. After the revolutionary period in which the castle, poorly maintained, is passed through the hands of several successive owners, Count Xavier Branicki, Polish émigré, philanthropist and mayor of Montrésor from 1860 to 1870 bought the estate in 1849, fixes some parts of the castle, rebuilt in others; it loose the main building in the Second Empire style and decorated with many works of art. His family still owns, lives part of an almost castle open to the public. The village itself, first built at the foot of the castle, only really developed until the Middle Ages; the twenty-first century, it turned to a tourism whose castle is one of the main assets.

How To Get To Château de Montrésor (Map):