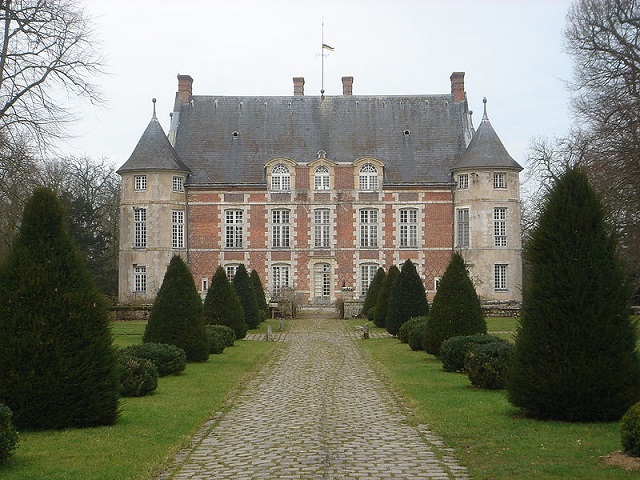 Location: Bailleau-l'Évêque, in the Eure-et-Loir departement of France (Centre Region).
Built: 15th century.
Condition: In good condition.
Ownership / Access: Jean de Dunois.
Notes: The castle of Levesville is a castle of the fifteenth century, revamped in the fifteenth and seventeenth centuries, located in the commune of Bailleau-l'Évêque, in the department of Eure-et-Loir.Levesville Castle or Levesville is located on the dominating plateau of Chartres. The first owners of the name Levéville "Levoisvilla, Levaisvilla or Levesvilla" appeared at the end of the eleventh century in the cartographies of the chartrain country, including those of the Saint-Père-en-Vallée in Chartres and Notre-Dame de Josaphat in Lèves. Vassals of the bishops of Chartres, the lords of Leveville were also ardent defenders of the earliest counts of Chartres. For more than two centuries, the family of knights of Levéville is present in the history of Chartres and its surroundings. The first lords of the place bore the following weapons according to several seals of the collection of Gaignières to the National Library. Michel Le Vacher dit de Levéville is probably the builder between 1479 and 1506 of a new castle girded with moats including a main body of dwelling, a drawbridge with châtelet of entry allowing to cross the moat and to enter the high Court. The latter was completely enclosed by walls on its four sides and flanked at each corner of a tower pierced with guns for the armament of the time (muskets and couleuvrines). A second enclosure protected the castle, its courtyard and its moat. It was also flanked by turrets and girded with ditches. In April 1656, the land of Levéville was erected in châtellenie by letters patent of the king at the request of its new owner who said to hold several fiefs close to one another of which "... the one of Levéville consisting of a chastity surrounded by foss A tower, a tower, and a drawbridge in front of and behind the said chastity, high justice, medium and low, on which depend a great number of vassals, rear-vassals, who extend into several circumvoisine parishes. An engraving dating from 1696, drawn by Gaignières, shows us the castle of Levéville as it was then.