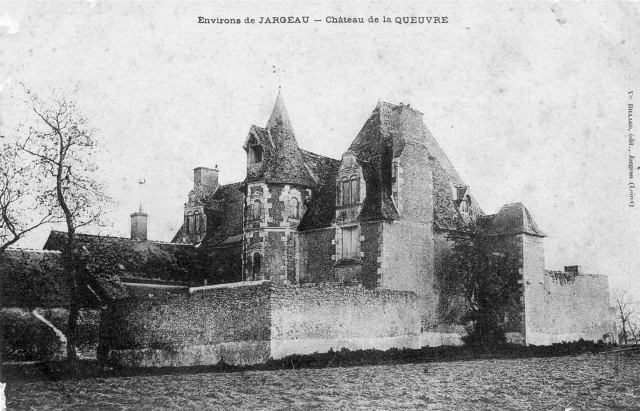 Location: Férolles, in the Loiret departement of France (Centre Region).
Built: 15th century.
Condition: Ruined.
Ownership / Access: Privately owned.
ISMH Reference Number: PA00098771
Notes: Château de la Queuvre is a French castle in Férolles in the Loiret region in Central Loire Valley.The castle was built between 1515 and 1520. It has the honor of hosting for one night King Louis XIV of France in 1659 during his trip in the Pyrenees to conclude his marriage with the Infanta Maria Theresa of Austria . The current farm was once the hunting lodge of the Duke of Penthièvre, who lived in Châteauneuf-sur-Loire. During its construction, the castle is located in La Férolles but Queuvre, old town which merged in 1818 with its neighbor, largest and populous. At The Queuvre was also in the Church of St. Gauld-et-Sainte-Emérance destroyed in 1838; the remains of the church and liturgical furniture were found after excavations conducted in 1858. The building is registered as historical monuments January 12, 1931.

How To Get To Château de la Queuvre (Map):