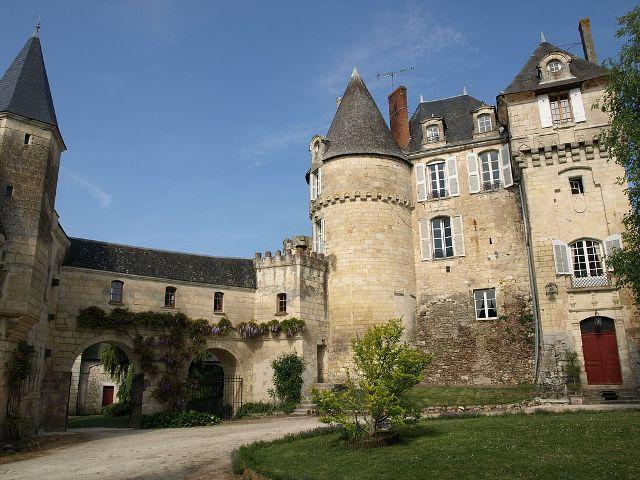 Location: Guerche (La), in the Indre-et-Loire departement of France (Centre Region).
Built: 15th century.
Condition: In good condition.
Ownership / Access: Privately owned.
ISMH Reference Number: PA00097772
Notes: Château de la Guerche is located on the banks of the Creuse, in the heart of the village of La Guerche, in Indre-et-Loire. The current castle of Guerche is built from 1454 by André de Villequier, who married in 1450 Antoinette de Maignelais, mistress of Charles VII, thus benefiting from the largesse royal2 treasure. Around 1495-1505, his son Arthus ends to build the four wings of the castle. During the wars of religions (late sixteenth century), the castle of Guerche is taken and plundered by the royal troops. In 1650, Caesar Aumont, governor of Touraine, rebuilt the main building to the southeast. He also resume the facade of the castle to give it more regularity and symmetry. The eighteenth century saw the decline of the castle. Acquired at auction by Marc-Pierre de Voyer de Paulmy d'Argenson in 1735, War Minister of Louis XV, the castle serves primarily as a hunting lodge. Under the Terror, the roof and the top floor of the castle were demolished. Strongly influenced by history, including the French Revolution, the castle takes its present appearance in 1830. It is the subject of a registration as a historic monument since March 13, 1944.

How To Get To Château de la Guerche (Map):