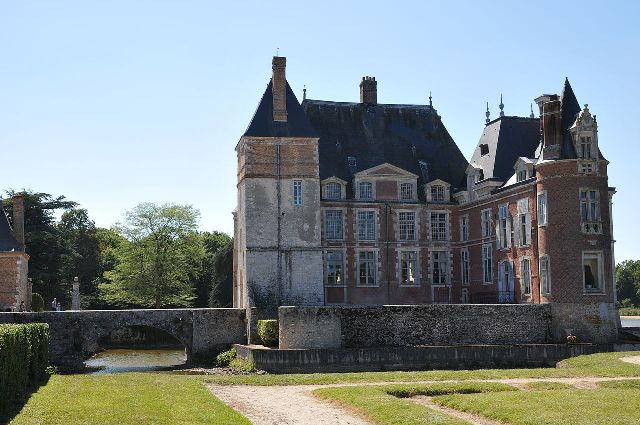 Location: Douchy, in the Loiret departement of France (Centre Region).
Built: 19th century.
Condition: In good condition.
Ownership / Access: Privately owned.
ISMH Reference Number: PA00098726
Notes: Château de La Bussière is a French château located in the municipality of La Bussiere and the Loiret region in Central Loire Valley. The castle, set on a 6 hectare pond is built at the center of a 60 hectare park. It hosts an international fishing museum.The castle is situated in the natural region of Puisaye, in the southeastern department of Loiret, in the canton of Briare.The castle was built in the nineteenth century. Regularly expanded, it is transformed century sixteenth. Tillet's family owns the castle for three centuries until the French Revolution. Common, a tithe barn, orangery, stables and a dovecote are built in the seventeenth century. The castle is open to the public since 1962. Having been an inscription 23 November 1993, the castle is the subject of a classification as historical monuments since 2 May 1995. Former residence of the family Duchemin Chasseval, causing the creation of the Museum of freshwater fishing, the castle was passed by inheritance to the family Bommelaer. In 2012 major restoration works of the great attic tried to fight the damage of dry rot, but this destructive fungus has attacked other parts of timber structures.The brick castle is located in a French garden designed by Andre Le Notre, including a pond of about six hectares. The park and the vegetable garden, an area of 60 hectares, have the label "Remarkable Garden".

How To Get To Château de La Bussière (Map):