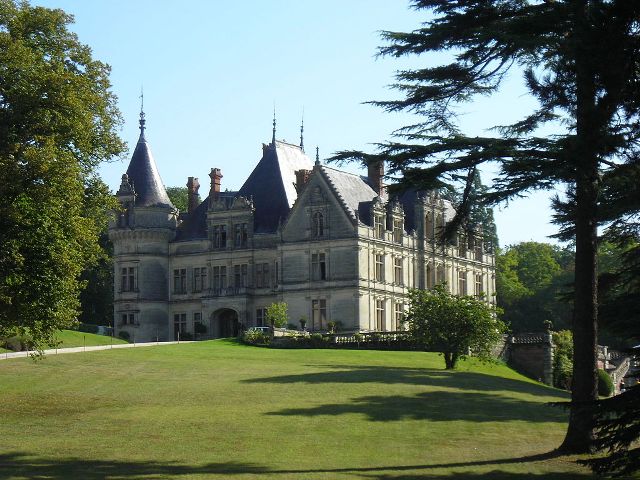 Location: Montlouis-sur-Loire, in the Indre-et-Loire departement of France (Centre Region).
Built: 1520-19th century.
Condition: In good condition.
Ownership / Access: Privately owned.
ISMH Reference Number: PA00097872
Notes: Château de La Bourdaisière is a Renaissance castle located in the southeast of Montlouis-sur-Loire, in Indre-et-Loire (France). Largely destroyed in the eighteenth century, the castle was rebuilt late eighteenth and early nineteenth century. Part of the castle and the park are listed as historical monuments since March 6, 1947. The park now hosts several places conservation and crop plants.Before building the castle was its location a fortress belonging to the fourteenth century John I the Meingre says "Boucicault." After several changes of owners, the castle eventually belong to the fifteenth century to Nicolas Gaudin, the treasurer of the queen. Philibert Babou, became lord Bourdaisière April 28, 1510 because of his marriage to Marie Gaudin (mistress including Francis I, Charles V), decided 10 years later, in 1520, to build a new castle in this location, retaining only one of the old medieval towers. It is in this castle that is born Gabrielle d'Estrées (and favorite mistress of Henri IV) and the seven sisters (also known for their roles courtesans, they are called the "seven deadly sins"), which earned the Castle the seamy nickname "hutch whores." After the seventeenth century, the castle will see the owners succeed. The field and go to Hercules de Rohan, the Duke of Montbazon, Charles d'Albert, then Etienne François Choiseul who retired in Chanteloup near Amboise after his disgrace. Choiseul ordered the demolition of the castle in order to deprive his rival the Duke of Aiguillon of sight since he had in his own castle in Véretz. He also used the stones recovered to build the castle of Chanteloup.

How To Get To Château de La Bourdaisière (Map):