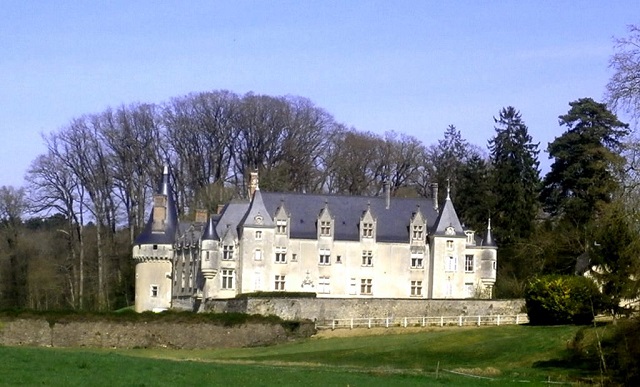 Location: Orbigny, in the Eure-et-Loir departement of France (Centre Region).
Built: 15th century.
Condition: In good condition.
Ownership / Access: M. et Mme Benoît du Rey.
Notes: The Château de l'Estang is a castle located in the commune of Orbigny, in the department of Indre-et-Loire, in France.The spelling of the domain name seems to have varied over the ages. If it is mentioned under the name of "l'Étang" on the map of Cassini and in the Napoleonic cadastre, if the name "les Étangs" appears in 1880, the spelling "l'Estang" In a work of the seventeenth century as well as on the IGN map. It is the large piece of water which gives its name to the castle. The Château de l'Estang, formerly the fiefdom of the châtellenie de Montrésor, was built in the fifteenth century but was extensively revised a century later. After being assaulted by the English during the Hundred Years War, the castle fails to be taken by assault by the inhabitants of Loches who lack grain and believe to find in the Estang. He was then invested in 1590 by a band of looters claiming to be leaguers. From there they ransom the neighboring properties. They are dislodged by the army corps based in Loches. The Château de l'Estang was restored several times, especially in the eighteenth century, and then from 1890 to 1964 on plans by the architect of the historic buildings Achille Lafargue. A chimney from the castle of Isle Savary in Clion in Indre was installed there in 1959.