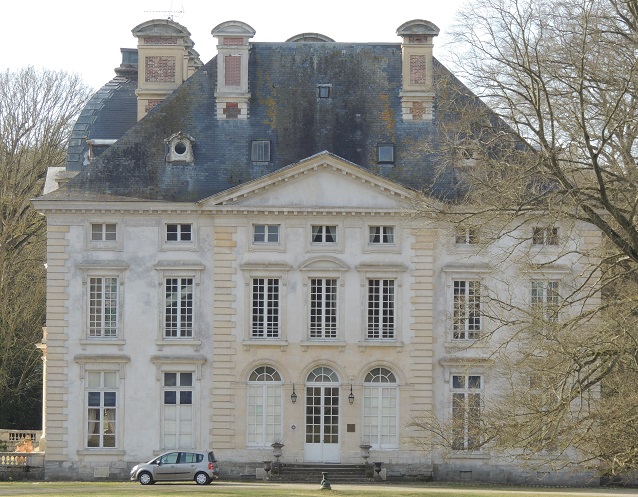 Location: Berchères-sur-Vesgre, in the Eure-et-Loir departement of France (Centre Region).
Built: 1772.
Condition: In good condition.
Ownership / Access: Charles Robert Boutin.
Notes: The castle of Herces is a French neoclassical castle located in the present commune of Berchères-sur-Vesgre in the present department of Eure-et-Loir and the region Center-Loire Valley. It was built in 1772 by Jacques-Denis Antoine, the architect of the Hotel des Monnaies de Paris, for the financial steward Charles Robert Boutin.The land of Herces belonged in 1137 to Amaury III de Montfort, Count of Evreux. A castle was built between the fourteenth and fifteenth centuries by the family of Simon de Richebourg. In the seventeenth century, the land and seigneury of Berchères and the fief of Herces belonged to the family of Knights of Buc, aka Buc-Richard. Gideon and John of the Buc were successive lords, according to the acts of Civil-State of Old Regime. In 1710 Louis Colbert (1667-1714), Count de Lignieres, the last son of Colbert, bought the estate, which was sold to M. de Beaumanoir in 1760. The present castle was built in 1772 by architect Jacques-Denis Antoine, architect of the Hotel des Monnaies in Paris for the financial steward Charles Robert Boutin, who kept it until 1791. Exactly at the same time, the sister of Charles Robert Boutin, Marie Charlotte Madeleine Boutin, viscountess of Montboissier, had the castle of Montboissier built at Montboissier nearby by the architect of King Nicolas Marie Potain. The castle belonged at the beginning of 2009 to Sheikhs Mohammed Bin Butti Hamid Al Hamid, president of the municipality of Abu Dhabi, and Saif Bin Mohammed Bin Butti.