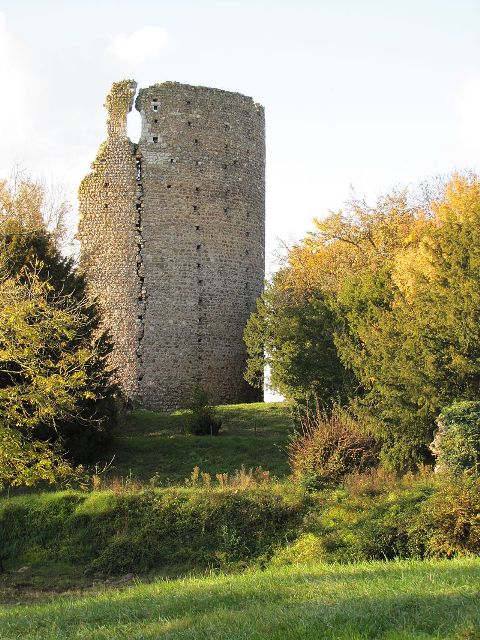 Location: Fréteval, in the Loir-et-Cher departement of France (Centre Region).
Built: 11th century.
Condition: In good condition.
Ownership / Access: Ruined.
Notes: Château de Fréteval is a feudal castle of the eleventh century, located in the municipality of Fréteval (Loir-et-Cher).Built in the nineteenth century by Nivelon I, steward of the Count of Blois, on the ruins of the Carolingian village of Saint Victor, the castle of Fréteval is a symbol of the struggle between the Counts of Blois, on which it depends, and Vendôme (the Anjou). Geographically castle steps, it was the mecca of tumultuous relations between the Plantagenets and the Kingdom of France2: meeting Thomas Becket Henry II King of England, Battle of Fréteval (1194) between Richard the Lion Heart and Philippe Auguste, where it lost the last Seals of France (hence the creation of the Seals Guard station). Throughout this volatile period, the administrative seat of the lordship will remain based in Meslay-le-Vidame, near Chartres, a major stronghold of the family Meslay, Lord of Fréteval until the thirteenth century3. During the War of Hundred Years, the fortifications of the castle have improved but suffers twice in 1418 the attacks of English troops. Damaged, remain inhabited until 1487, year of the last coins found. He then used stone quarry where current state. The keep is the subject of a registration as a historic monument since 13 February 19264. Since 1968, excavations and preservations operations are implemented. The area is currently the property of Armand de La Rochefoucauld Duke Doudeauville.The castle, on its original site of 4.50 hectares, with 3 lines of defense, also presents a real tower witnessed the first generation of dungeons to both circular and stone; Here flint. The keep, built around the year 11005, is one of the oldest round keep France. Surprisingly, the concept of massive and austere fortress had to concede here under female influence, with the presence of such low relief of the Lady snake.

How To Get To Château de Fréteval(Map):