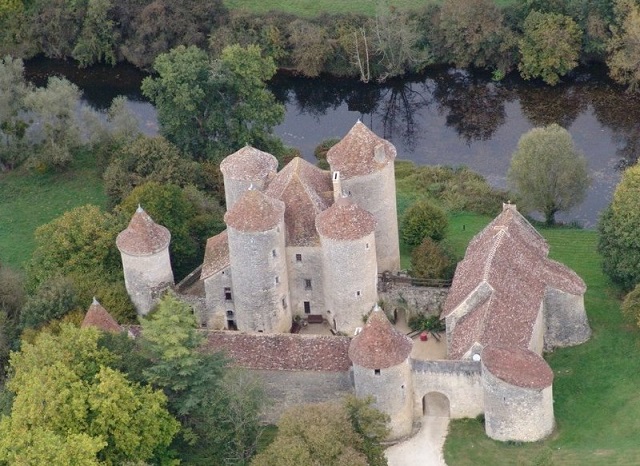 Location: Concremiers, in the Eure-et-Loir departement of France (Centre Region).
Built: 14th century.
Condition: In good condition.
Ownership / Access: Hugues de Poix.
Notes: The castle of Forges is located on the commune of Concremiers, in the department of Indre, in the former province of Berry.Founded on the site of an old clod overlooking the left bank of the Anglin, this castle was part of a group of military buildings of this type designed to protect the southern boundary of the Berry from the English invasions. This fortress, quoted at the beginning of the fourteenth century, is one of the best preserved in its region and has not undergone any subsequent modifications which could have altered its aesthetic coherence. It is composed of a square keep, flanked at the angles of four round towers and surrounded by three sides of walls on which are supported five towers pierced with archers, one of which constitutes the dovecote. In the middle of the fourteenth century, the castle and the seigniory entered by inheritance into the Picardy family of Tyrel, sire de Poix. By letters patent of May 4th, 1442, Jehan de Poix, a cupbearer of Charles VII, receives from the king "for the good services of our so-called cupbearer, made us the past time, both in fact of our wars and in his dictating office" Authorization to "fortify and retain the said place of Forges, and to make there ditches, walls, towers, paliz, bridge-lever, barbican". The ditches and the drawbridge have since disappeared. Forges remained close to three centuries in the same family until Marguerite de Poix, qualified lady of Forges in various compromises. This last wife, about 1600, Antoine de Lage, lord of La Palisse, of whom she has no posterity. His sister, Renee de Poix, who inherits from it, marries Pierre de Muzard, and has as his daughters Catherine de Muzard, dame de Forges, married to Charles de Montmorency, and Gabrielle de Muzard, lady of La Rochebellusson.

How To Get To Château de Forges (Map):