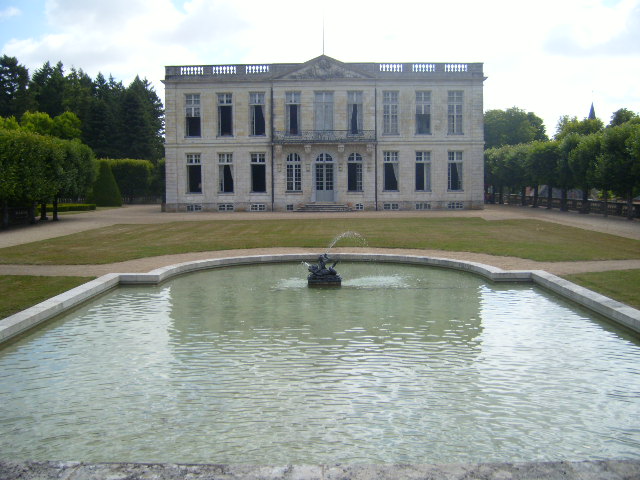 Location: Bouges-le-Château, in the Indre departement of France (Centre Region).
Built: 1765.
Condition: In good condition.
Ownership / Access: --
Notes: Château de Bouges is a French castle in the town of Bouges-le-Château in the department of Indre and region Centre-Val de Loire. This elegant "madness" built of stone was built in 1765 by an unknown architect Claude Charles François Leblanc Marnaval, ironmaster and director of the Royal Manufacture of sheets of Châteauroux. Protected as historical monuments, Castle Bouges like a hundred other monuments, state property is managed, lively and open to the public by the National Monuments Centre.The land of Bouges (Condita volgensis) is mentioned in 917 in the founding charter of the Abbey Deols. In the thirteenth century, it comes under the lordship of Levroux. In 1218, the lord of Chateauroux, Guillaume de Chauvigny, leaves the prerogative to his brothers. It is transmitted by women up to the fifteenth century, through marriage in 1416 to Jacquette Peschin with the V Bertrand de La Tour d'Auvergne, the manor, presumably made at the time of a feudal mound, will enter the Medici family. Indeed, a century later, in 1518, their great-granddaughter, Madeleine de la Tour d'Auvergne, married Lorenzo de 'Medici, Duke of Urbino. From this union was born Catherine de Medici whose husband became King of France under the name of Henry II. This is not interested in his land and Berry in 1547, the year of his accession, it offers half the land of Bouges his adviser and former butler, Jean-Baptiste Seghizo " reward and recognition [...] good, great and faithful service. "2 The little castle is described as a "safe house (sic), ditches, backyard, home and garden being said parish and town of Bouges" 3. By successive purchases and exchanges, Jean-Baptiste Seghizo recomposed land of Bouges he eventually hold all in 1565. In his lifetime, it is divided between his nephews, Marc Anthony, first carver of the queen, "captain town and castle "of Verneuil-sur-Seine, and Jean Marc. But they die childless so the donation comes back to John the Baptist who "sells, assigns, leaves and abandons" Bouges the benefit of another nephew, Marc Antoine, under an authorization given by Catherine de Medici September 20, 1570. After the Fronde, October 26, 1657, the land is leased to Françoise Prunelay, widow of Anne of Tournebut king Advisor state boards and private, first president request the palace at Rouen. His descendant, Claude Leroux, inherits Bouges in 1684. After him, the earth goes through succession to Claude Lignault, lord of Lussac, but this one, heavily in debt, saw its assets seized and sold by auction Bouges to Jacques Alleaume, treasurer of France in the generality of Alencon, under a decree of November 15, 1717. his widow, Blanche Marie Anne Lenormand, abandoned his property to his son Jean Jacques Alleaume, treasurer of France in the generality of Bourges . The separate property of that spouse sells the lordship of Bouges and its dependencies (Brittany, La Champenoise and Liniez) Claude Charles François Leblanc Marnaval, March 30, 1759, for 275,000 books, including furniture and household effects valued at 25,000 pounds. Deeds of sale of the eighteenth century show that the old feudal mound was fortified, probably during the religious wars and the Fronde.

How To Get To Château de Bouges (Map):