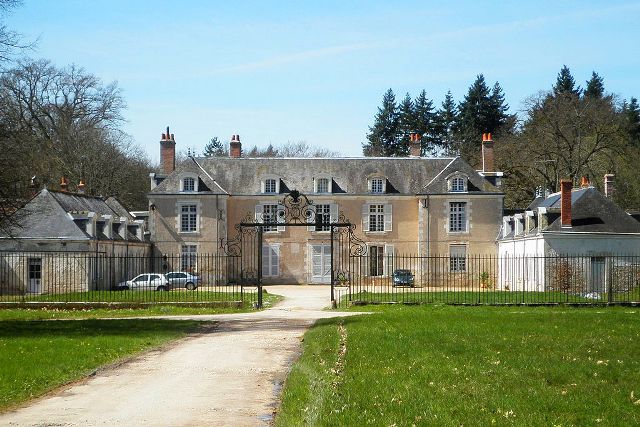 Location: Ardon, in the Loiret departement of France (Centre Region).
Built: 1680-1829.
Condition: In good condition.
Ownership / Access: Private property.
ISMH Reference Number: PA45000020
Notes: Château de Boisgibault is a French château located about ten kilometers south of Orleans, Ardon in the Loiret and the region Centre-Val de Loire.Boisgibault name appears in the natural region of Sologne in 1510 in an area of ​​woods. Jean Maubert bourgeois Protestant Orleans, is the first known owner. In 1564, there was a manor formed a central body comprising a ground floor, flanked by two small towers with pepper did not exceed the main roof. Boisgibault, modest in its infancy, will swell gradually to encompass nearly 3 000 hectares in the eighteenth century, then go being reduced to its present state, roughly similar to that of its origin. Rebuilt the mid-seventeenth century, the manor (then reserved the name "castle" fortresses) existed in its present form, with the same interior layout. The last of Boisgibault Maubert retired to Paris. His father, counselor to presidial Orleans, had made bad business. At the request of creditors, Boisgibault was seized and auctioned, September 13, 1680. The house changed hands several times and was acquired May 11, 1712 by Joseph Charpentier, Lord Brandelong and Meliers. He made the donation to his brother Jacques Charpentier Mondonville, receiver of Orleans and with a large fortune. He will lead this land to its greatest development. He was succeeded by his son Jacques Charpentier Boisgibault (1721-1794), advisor to King Louis XV in his advice and President of the Paris Court of aid with Malesherbes. Charpentier added the two wings and the common yard. They renovated the rooms and furnished the chapel. Boisgibault was purchased by the Marquis of Gasville (1790-1865) in 1829. It was a great Norman lord, no children, former prefect, peer of France, Counsellor of State, Knight of the Legion of Honour and the order of Saint Gregory the Great. The property was organized to hunt and receptions were renowned throughout the country. Boisgibault the family never lived in the property.