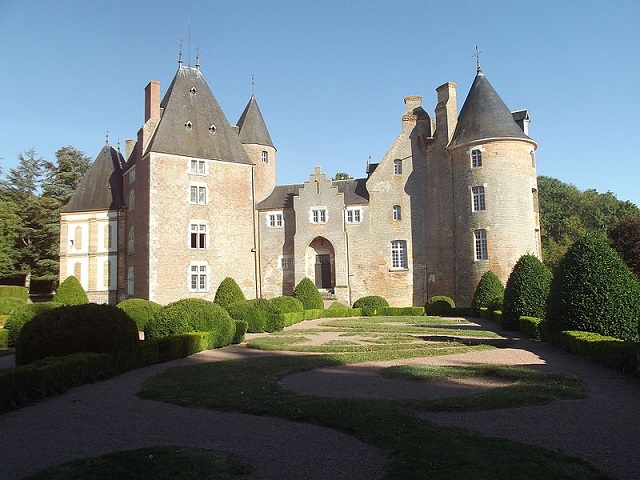 Location: Blancafort, in the Eure-et-Loir departement of France (Centre Region).
Built: 1475.
Condition: --.
Ownership / Access: --.
Notes: The castle of Blancafort is located in the heart of the village of Blancafort (Cher), in a region of Berry which is called Pays-Fort. It was built after 1475 and completed in the early sixteenth century for François de Boucard and his wife Marguerite de Cugnac.The first mention of a lord of Blancafort appears in 1064 concerning a certain Garnier. In the second half of the fourteenth century Agnès de Blancafort married Jean de Boucard. By this marriage the lordship of Blancafort passes to the family of Boucard. The last descendants of the family of Boucard who were owners of the castle of Blancafort are Hélie and Amable of Sainte-Feyre. Helie de Sainte-Feyre, ruined and in debt, seized his castle of Blancafort, which was then adjudged by the parliament to Claude de Faucon. Claude de Faucon came from a Florentine family who settled in France after King Charles VIII, when he returned to France after his conquest of Naples. According to Anselme de Sainte-Marie, Claude de Faucon is "headmaster of Queen Marie de Medici, Treasurer of France at Moulins". Blancafort is close to Gien, a city passing between Moulins and Paris. This geographical position could explain the choice of Claude de Faucon to settle in Blancafort.From 1781 to 1919 the castle of Blancafort belongs to the family of Duranti. Some members of this family were mayors of the village. The Count of Duranti who bought the castle of Blancafort in 1781 is a member of the financial administration in Versailles. In the church of Blancafort is preserved a copy of a Holy Family of Mignard realized by Charlotte of Duranti in 1834. From 1919 to 1963, the castle of Blancafort knew several successive owners. During the Second World War the monument was occupied by the Germans who almost completely destroyed the chateau of the castle. What remains of the chartrier is now preserved in the departmental archives of Cher in Bourges. The castle is listed as a historic monument by a decree of 19 February 1926 In 1963, the castle was purchased by the Baroness de Cramer. She undertakes an important restoration of the monument. She writes, moreover, that it is above all the interior "that had suffered the outrage". It also launched the creation of a French garden in front of the west facade of the castle.

How To Get To Château de Blancafort (Map):