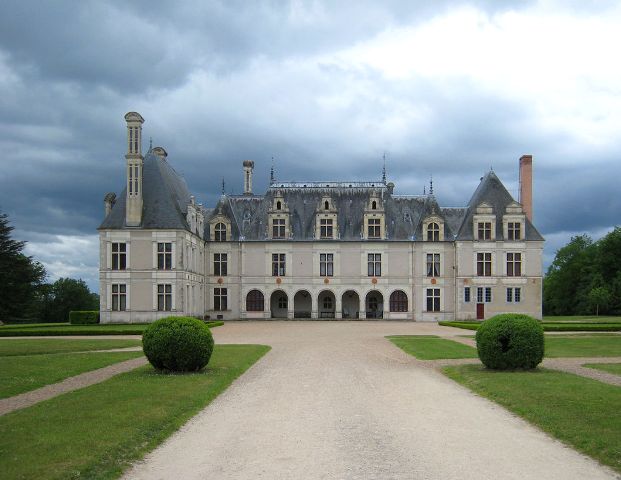 Location: Cellettes, in the Loir-et-Cher departement of France (Centre Region).
Built: 15th century.
Condition: In good condition.
Ownership / Access: Privately owned.
ISMH Reference Number: PA00098404
Notes: Château de Beauregard dating from the sixteenth century, is located in the town of Cellettes in the Loir-et-Cher about ten kilometers south of Blois. It is part of the Loire châteaux and is famous for its Gallery of Illustrious. It is the subject of a classification as historical monuments by the list 1840. Open to visitors.The main building has two floors of galleries: the ground floor a covered porch gallery with seven arches on the first floor and a covered porch. In the sixteenth century, the galleries were designed to connect the two residential buildings. In the south, at right angles, advance a wing with two floor which has on its roofs, chimneys Italian, tall and narrow, with interesting inclusions ardoise.Il must imagine the other side of the court, another wing, probably the body of primitive home of the fifteenth century, including Jean Thier during the construction of the castle. This wing, visible on the plans of Androuet Hoop, was destroyed in the seventeenth century to make way for a more modern building that has disappeared in the nineteenth century. The rear facade overlooking the park, was changed in the nineteenth century. It abolished the court of the tennis court to double the central building. Thus, the residential wings are no longer front part and back cover is decidedly more massive.

How To Get To Château de Beauregard(Map):