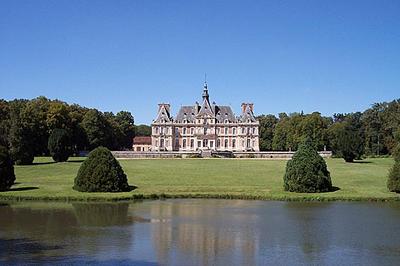 Location: Béville-le-Comte, in the Eure-et-Loir departement of France (Centre Region).
Built: 17th century.
Condition: In good condition.
Ownership / Access: --
Notes: Château de Baronville is a castle located in the municipality of Beville-le-Comte in the Eure-et-Loir in France.The name of Baronville date of the Gallo-Roman period (Baronis villa). Castle Baronville was initially a fortress to control the Voise Valley. In 1623, a castle was built on the remains of the previous by the family of Montescot. He then marriage in the family Lattaignant. The Lordship of Baronville (and Bainville County) is acquired in 1783 by the Marquis Etienne Francois of Aligre, the first president of the Paris parliament. In 1868, his great-grand-son of the Marquis of Aligre Pomereu shaved the castle in 1623 and built the present to receive the elite of the Second Empire by the architect Leon Sanges. The same craftsmen, highly qualified, then made the covers and ridges Castle Baronville, Notre Dame de Paris, the Mont Saint-Michel, but also of the Statue of Liberty in New York. During the twentieth century, the field of Baronville hosts wounded soldiers between 1914 and 1918, thanks to the generosity of Catherine de Clermont-Tonnerre, Viscountess Pomereu Aligre. Then it will be held three times by German soldiers (including Field Marshal Friedrich Paulus) between 1940 and 1944, in particular to accommodate an air base to fight against Operation Overlord in Normandy. These successive occupations left the building and park in a relatively poor state, until the Count and Countess de Rouge (see Maison de Rouge), descendants of Aligre, undertaking major restorations to save this heritage historical and family. Since 1981, the castle is open for rental for large wedding receptions, product launches, film shoots, as well as for group visits by appointment. In 2012, Count Aymeric de Rouge opens the Carrousel Baronville receptions, after a complete renovation of a wing of the old stables of Baronville, built in 1882 by Armand, Marquis of Aligre Pomereu. Equestrian center, the place is unfortunately distorted by a huge open dump. The year 2015 marks the resumption of the activity of great hunts Baronville, aiming to participate in the balance of the field according to ethical principles and respect for nature.

How To Get To Château de Baronville (Map):