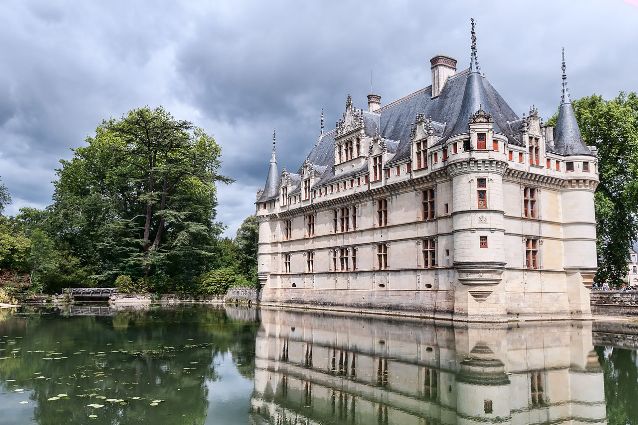 Location: Azay-le-Rideau, in the Indre-et-Loire departement of France (Centre Region).
Built: 1518.
Condition: In good condition.
Ownership / Access: --
Notes: Château d'Azay-le-Rideau of Azay-le-Rideau is a listed building owned and located in the town of the same name, in Indre-et-Loire, France. It can be accessed through the line TER Tours - Chinon marking routinely stop in the town. The castle is the subject of a classification as historical monuments since 18 April 1914. The castle of Azay-le-Rideau, like hundreds of other monuments, state property is managed, hosted and open to the public by the national monuments Centre.The first medieval castle of Azay was built around 1119 by one of the first lords of the place, Ridel (or Rideau) of Azay, knight of Philip Augustus, who built a defensive fortress intended to protect the road between Tours and Chinon . It was burned by Charles VII in 1418 when the king of Azay to stay on the road to Chinon, is caused by the Burgundian troops occupying the stronghold. The captain and 350 soldiers were executed, and the village also will keep until the eighteenth century the name of Azay-le-Brûlé, still carried by a common Deux-Sèvres.

How To Get To Château d'Azay-le-Rideau (Map):