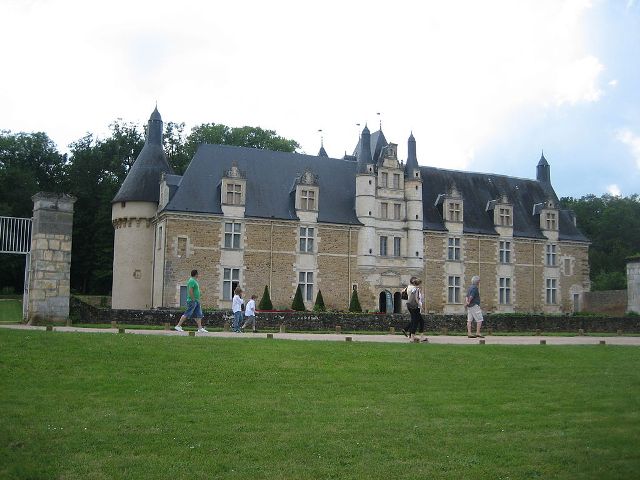 Location: Lourouer-Saint-Laurent, in the Indre departement of France (Centre Region).
Built: 14th century.
Condition: In good condition.
Ownership / Access: Owned by the municipality.
ISMH Reference Number: PA00097378
Notes: Château d'Ars is located Lourouer-Saint-Laurent, municipality of the department of Indre and region Centre-Val de Loire.Castle Ars date of the nineteenth century and remodeled in the sixteenth century. The origins of the castle are still unknown today. It is not known the exact date of its construction, probably in the course of the fourteenth century, or the original owners. The primary sources back to the early fifteenth century. Around 1405, a Perrin de Bourges (great grandfather of Louis d'Ars, the most famous owners of the castle), probably himself the son of Perrin de Bourges and Jeanne Boisvilliers wife Marguerite d'Ars. They have three children: a son named Perrin II (aka Peter) as his father, and two daughters. Marguerite d'Ars down probably itself Geofroy Ars found reported in 1292 among the vassals of Lord of La Châtre. It was she who brings the family Bourges lordship of Ars. In 1435, Perrin II Bourges (alias Peter, grandfather Louis) is lord of Ars. He married Philippe de la Celle, lady Montlevic, around 1440. She is a widow for the second time in 1471. They have three son, said Perrin de Bourges of Ages, Ars Hélyon ​​and Jacques d'Ars, who died without posterity. Perrin de Bourges said of Ages (father of Louis) and Françoise Villelume have four children: Louis d'Ars, born about 1465, and Marguerite, Gabrielle, and Florentine. The young Louis d'Ars teaches the profession of arms and became captain of a hundred men of arms and long lieutenant of King Charles order company commanded by Prince Louis of Luxembourg, Count of Ligny. He distinguished himself in the wars of Italy, from 1493 to 1512 under Charles VIII and Louis XII below. He has under him the Chevalier Bayard, and Jacques de Chabannes, better known under the name of the Palice. Louis XII Louis reward Ars erecting earth Ars marquisate then Francis made the Terme Duke by act of 29 July 1516. It accumulates titles. In a release from 1526, Louis d'Ars qualifies: Term Duke, Earl of Vauguyère (Voghera, between Pavia and Alexandria, Italy) and La Chanterelle (Girola on Lake Como, Italy) "Duke of Tresmes Marquis Ars, Earl of Vauguyères and Chanterelles, advising and ordinary of the king's chamberlain, and captain of lances provided 48 orders of the king. " He died around 1530. The Lordship of Ars, "with fortress, barns and warrens" returns to his elder sister Marguerite d'Ars, widow of Jean de Confolens. It sells a few years later Marguerite Douerou Jean widow of the Forest. Daughter Margaret, Anne of the Forest, and her husband Peter Chamborant, Lord of Montgivray and Baron Neuvy Holy Sepulcher become owners in 1584; they pursue the modernization work, including completing the facade. The castle is in the heritage of their daughter Margaret, wife of René Ysoré, Baron Hervault and Pleumartin. They lose the castle seized by order of the Prince of Conde. Several owners succeed and in 1727, the purchaser is a citizen of Paris, Joseph Hermet. Following a meurtre4, Hermet is expropriated and in 1755, the castle was awarded to Jean-Jérôme Bardon, Esquire, secretary Roy, recipient of the salt tax in the attic salt Châtre, which creates the park, presents the castle in state and enlarges the field. Papet Jean-Baptiste and his brother Jacques were farmers in Sarzay, near Nohant, in 1780. The brothers acquired for 175,000 pounds, around 1782, the castle of Ars, with the Jean-Jérôme Bardon. On the death of Gustave Papet, grand-son of Jean-Baptiste Papet, in 1892, the castle becomes property of the succession Baucheron family Lécherolles. In 1926, the castle was sold.