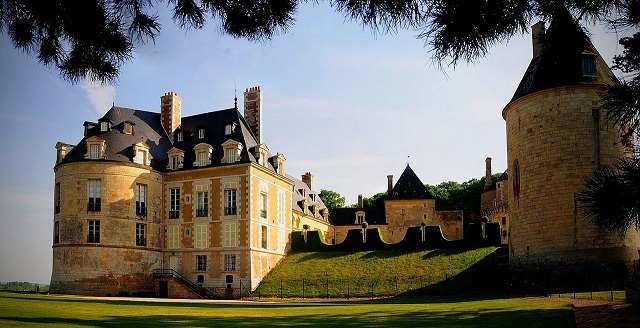 Location: Apremont-sur-Allier, in the Eure-et-Loir departement of France (Centre Region).
Built: 14th century.
Condition: In good condition.
Ownership / Access: --
Notes: The Château d'Apremont is located on the lands of the commune of Apremont-sur-Allier, in the department of Cher, in Center-Loire Valley. Moreover, the former seigniorial residence, due to its location in slight overhang, occupies a dominant position on the banks of the Allier. In the middle of the Middle Ages, instead of the present castle, there was previously a stronghold which controlled the only road close to the river axis formed by the Allier. During the civil war between the Armagnacs and the Burgundians (at the end of the fourteenth century, this first fortress underwent complete complete destruction.) After this civil conflict, between 1450 and 1500, Rebuilt to become the current Château d'Apremont. It is probably during these works, carried out during the second half of the fifteenth century, in 1477, that the enclosure of the fort is reworked. The latter is then adorned with five fortified towers, including the tower known as "Le Bourg" and the so-called "la Chappelle". Between each of them are deployed ramparts in the form of curtain walls.At the beginning of the seventeenth century, the seigniorial dwelling was the object of an elevation, thus endowing it with an additional floor. In addition, during the same construction campaign, the main building was also provided with new bays to accommodate other door frames. In the following century, one of the wings of the building was redesigned as a royal glass workshop. The foundation of this workshop is attributed to the middle of the eighteenth century (in 1752). During the first half of the nineteenth century, the former seigneurial residence enjoys an important restoration. Stables were then built in lieu of the royal glass. The enclosure element that connects the "tower of the Village" with that of "the chapel" is destroyed.Between 1934 and 1942, the Château Apremontois was rebuilt. This renovation is supervised and financed by the industrialist Eugène Schneider. This operation is also carried out under the patronage of the decorator De Galéa. The works carried out during the first half of the twentieth century endow the Château d'Apremont with a neo-Gothic architectural style. The Château d'Apremont, as well as the stables which are attached to it, are registered on the list of historic monuments of France by decree of 16 June 1986.

How To Get To Château d'Apremont (Map):