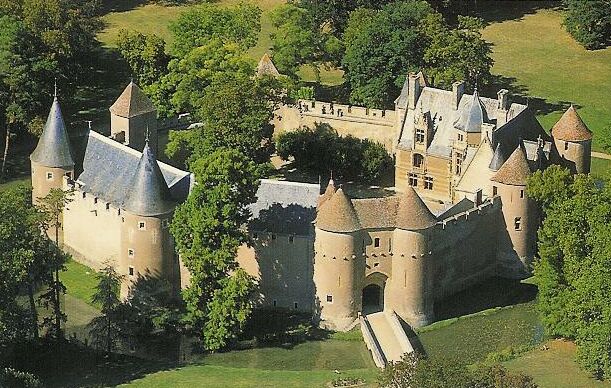 Location: Ainay-le-Vieil, in the Cher departement of France (Centre Region).
Built: 14th century.
Condition: In good condition.
Ownership / Access: Owned by a Private company.
ISMH Reference Number: PA00096626
Notes: Château d'Ainay-le-Vieil is a castle, located in the municipality of the same name, in the department of Cher in France. He is nicknamed "Little Carcassonne" for its fortifications. The castle is the subject of several successive protections as historical monuments. It is first placed on the list of historical monuments in 1862 before being withdrawn in 1888. The facades and roofs of the castle complex (that is to say the enclosure with towers, the entrance postern and residential dwelling) and the moat to the outside; the oratory and the large living room on the first floor of the house for the interior are the subject of a classification as historical monuments since February 1, 1968. The park and gardens, and the boundary walls are the 'subject to registration as historical monuments since July 5, 1993. Finally, both the garden entrance pavilions, the fishery and the room adjoining water the garden with the channel that surrounds the Carthusian and the entrance gate of the farm are the subject of a classification as historical monuments since December 3, 1998.

How To Get To Château d'Ainay-le-Vieil (Map):