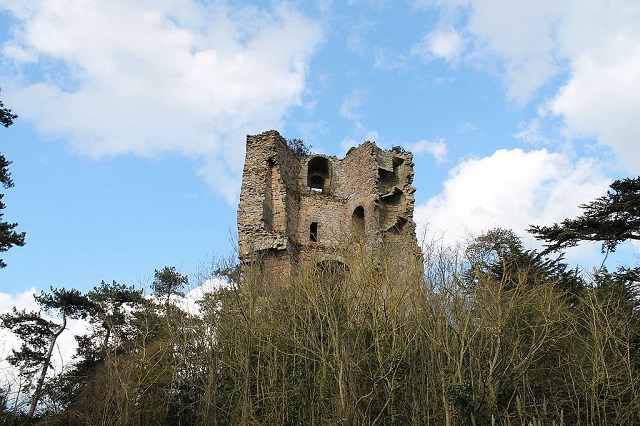 Location: Saint-Brieuc, in the Cotes-d-Armor departement of France (bretagne Region).
Built: 1395.
Condition: Ruins.
Ownership / Access: --.
Notes: The tower of Cesson dominates the estuary of Gouët and the bay of Saint-Brieuc.It was built in 1395 by order of the Duke of Brittany, Jean IV de Montfort. Built at a height of 70 m on a rocky outcrop overlooking the bay, the Tour de Cesson is a historical and archaeological site. This strategic location is chosen to protect the mouth of the Gouët and the town of Saint-Brieuc from the attacks of pirates and possible attackers. Besides, various vestiges, coins, ruins, foundations testify to the occupation of this place, notably by the Romans or the Vikings. The tower also allows the Duke to monitor maritime commercial traffic. The tower was occupied by Olivier de Clisson while Duke John IV claimed it from the constable, following the treaty of 1388. It was part of the ducal domain in 1423, when it served as a prison at Morice de Ploesquellec, and in the royal domain in the sixteenth century (about 1532), when an edict brought together the jurisdictions of Cesson and Goëlo to transfer them to Saint- Brieuc. As soon as the war of the League begins in Brittany, because of its positioning, the tower of Cesson assumes a great strategic importance. It was finally taken in 1598 by the Comte de Brissac, who ordered the dismantling of the fortress at the request of the inhabitants. A part is preserved to serve as bitter to the navigators from 1625.Before the Revolution, the Tower of Cesson, built on a piece of land called the Land of the Duke, belongs to the Duke of Penthievre. Sold in 1791, it was bought in 1852 by Alexandre Olivier Glais-Bizoin who built a manor near the tower. He lived there until his death in 1877. The ruins of the Cesson tower have been listed as a historical monument since 1926. The land will be requisitioned by the Germans during the Second World War. The position Wn - Po 05 (area named by the Germans) was built to defend the entrance to the port of the city. Mines will be laid and bunkers built at the end of the point.

How To Get To Tour de Cesson (Map):